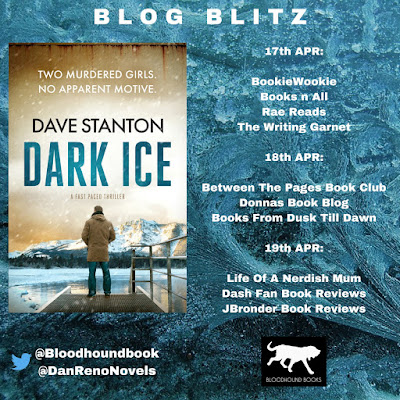 I’m delighted to be sharing my review for Dark Ice by Dave Stanton as part of the blog blitz today. First of all though let’s take a look at the description for the book... 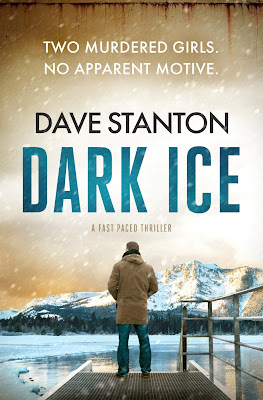 While skiing deep in Lake Tahoe’s backcountry, private detective Dan Reno finds the first naked body, buried under fresh snow. Reno’s contacted by the grieving father who wants to know who murdered his daughter and why?
How did the body end up in such a remote, mountainous location? The questions become murkier when a second body is found. Is there a serial killer stalking promiscuous young women in South Lake Tahoe? Or are the murders linked to a different criminal agenda?

Searching for answers, Reno is accosted by a gang of racist bikers with a score to settle. He also must deal with his pal, Cody Gibbons, who the police consider a suspect. The clues lead to the owner of a strip club and a womanizing police captain, but is either the killer?

The bikers up the ante, but are unaware that Cody Gibbons has Reno’s back at any cost. Meanwhile, the police won’t tolerate Reno’s continued involvement in the case. But Reno knows he’s getting close. And the most critical clue comes from the last person he’d suspect.

If you are looking for a gritty and action packed story then look no further as Dark Ice will certainly deliver this. In fact the entire series has been one rollercoaster adventure, now don't feel put off starting with book four as they do work as standalone stories. However I will say that you are missing out on the brilliant friendship that is portrayed by Dan and Cody. They always manage to make me smile even when times are tough and trouble has well and truly found them!

The setting of the book as ever adds a contrast to both the violence and darker parts of the story with beautiful scenery and locations. Dark Ice moves quickly and I especially liked the more personal side to the story as we get to see a little bit more of Dan's relationship with Candi. There are a few surprises before I reached the end of the story and this helped to keep the momentum going with my interest held right through to the end. Born in Detroit, Michigan, in 1960, Dave Stanton moved to Northern California in 1961. He attended San Jose State University and received a BA in journalism in 1983. Over the years, he worked as a bartender, newspaper advertising salesman, furniture mover, debt collector, and technology salesman. He has two children, Austin and Haley, and lives with his wife, Heidi, in San Jose, California.
Stanton is the author of six novels, all featuring private investigator Dan Reno and his ex-cop buddy, Cody Gibbons.
Links:
www.facebook.com/DanRenoNovels
Twitter: @DanRenoNovels
danrenonovels.com/
www.amazon.co.uk/Dave-Stanton/e/B00HLT6BB0/
www.amazon.com/Dave-Stanton/e/B00HLT6BB0/
at April 17, 2018