Thanks for stopping by I'm delighted to be sharing my review as part of the blog tour today. There is also the chance to solve a puzzle to win a copy of the book! Follow along with the tour to find the puzzle pieces! 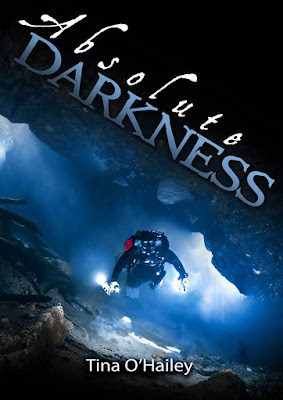 A thrill ride through time that will make you hold your breath.
Sitting by the campfire, Brandy admitted a secret to her friends. She swore she saw a ghost when exiting a cave earlier that day. Was she seeing things? Did they believe her? The next day, breaking a cardinal rule, she snuck back to the cave alone. No one knew where she was. What if she fell or was trapped? There would be no rescue.
For ten thousand years Alexander had kept the time streams of this universe safe from an eternal destructive force that continually threatened to tamper and destroy all. Locked in an unremitting battle, the two foes become sidetracked by an unexpected visitor. An entangled journey begins with chilling twists and turns until becoming locked into an inescapable death deep within a submerged cave.
Who will come out of the watery depths alive?

Preorder from the publisher. Use code: PREORDER2018 to receive a 10% discount!

I guess in a way it would be difficult to describe Absolute Darkness other than to say it is a romance but with a paranormal twist. However there are also lots of other layers to it too which make for a very interesting read. The setting added a mysterious touch to the story as the main character Brandy sets out to explore a cave and finds herself caught in the middle of a very dangerous situation. This story moves quickly and balances out the romance and storyline pretty well as we get to know both Brandy and Alexander but also the danger that they face. I also enjoyed the fun friendship that Brandy and Susan share which provided some lighter moments too.

The premise was something that I had never come across in a book before so I really enjoyed seeing the time aspect explored and what Alexander was capable of. There is a little bit of everything within the plot such as paranormal, part thriller and of course a romance at it's heart. As with any book involving time travel it can be easy to get confused but in the case of this story it didn't happen too much and within a minute or two I had it straight in my head again. I loved all the descriptions of caving even if I felt a little light headed when the tight spaces were described.

Excerpt from Absolute Darkness:
[577 words]
Introduction: This is why I don’t cave dive.

Brandy had watched Susan go through the tunnel. It was hard to see. As Susan had wiggled through, silt and debris had been kicked up. She waited for a few moments after her pal had stopped resembling Winnie the Pooh with flippers. She wanted things to settle down a bit more so she could see where things were before pouring herself through. Brandy followed the same positioning that Susan had. She tried to place the high point of the boulder in her belly so that she could bend around it. However when she poured herself into the tightest spot she found that her rib cage stuck firmly. Unlike Susan’s womanly proportions, Brandy’s largest bone structure was her rib cage. With the tanks, one arm and its shoulder ahead of her, one arm, shoulder and her legs behind her, and her chest stuck firmly on a rock, Brandy tried to relax. She turned slightly one way then the other to see if anything would give. She tried leaning forward, placing her forehead near the side of the tunnel, hoping to get her rib cage to concave just enough. Her spine yelled from the abuse on the opposite side of the tunnel.

“Well, that’s a f**er,” Brandy thought to herself.

By this time, Susan had swum back through the tunnel and was facing Brandy, giving moral support. She tried not to get too close, to allow room for Brandy to come through. Brandy was trying hard to bend her forward arm back to touch her rib cage and to feel for anything that might move. The other arm was behind her trying to do the same. She looked at Susan. The tilt of her head said everything. Susan pointed to Brandy then held up one hand, the thumb clenched tightly between her first two fingers: “You stuck?”
Brandy raised one finger in reply: “F.U.”

Susan mimed pushing Brandy, then reached out and grabbed her hand and gave it a squeeze and a tug.

Brandy momentarily thought about trying again. She could squeeze through if she really tried. She could gain maybe another ½ inch if she let out all of her air, and pushed through. She knew she could do it. She could fit through anything Susan could, just with a little more effort on her part. She motioned for Susan to back swim and give her some room. She reached up with her free hand and grabbed ahold of a small outcropping of rock in the tunnel. She took a good breath, relaxed, let out every bit of her air and concentrated on squeezing her rib cage as much as she possibly could. At the same moment she pulled with the one hand, pushed with the other and kicked as much as she could. She could feel herself going through; she had to get through or she would be unable to take a breath. Now was not the time for panicking. Just then, her hand slipped off of the rock and her elbow crashed into her tanks. Although things move slowly in water, the force of the impact broke a seal on one of the two regulators. The gas inside the tanks began escaping as fast as it could. Brandy nearly panicked as she saw the rush of bubbles coming from her tank. All of that air and she was stuck in a place that she could not even take a breath. 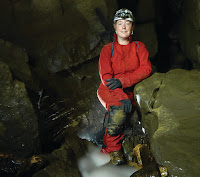 Tina O'Hailey (author of animation text books “Rig it Right” and “Hybrid Animation”, professor in animation, visual effects and game programming, caver and occasional mapper of grim, wet, twisty caves—if she owes a friend a favor or loses a bet—whose passion is to be secluded on a mountain and to write whilst surrounded by small, furry dogs and hot coffee) was struck by lightning as a baby.

Please check out the virtual blog tour and you might find some embedded fun in the imagery.

In fact, I dare you.

Can you find the hidden puzzles that lead to an autographed book give away?

First one to figure it out wins an autographed book.

Check out the previous stops on the tour
(https://www.rachelsrandomresources.com/absolute-darkness) 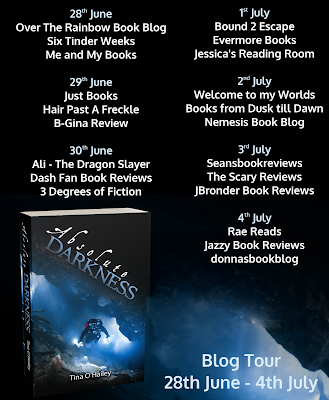