Thank you for stopping by I'm delighted to be one of the stops on the blog tour for Dortmund Hibernate by C J Sutton and sharing a guest post today. 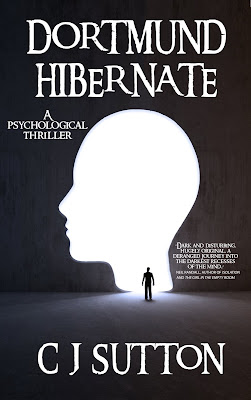 Psychologist Dr Magnus Paul is tasked with the patients of Dortmund Asylum – nine criminally insane souls hidden from the world due to the extremity of their acts.

Magnus has six weeks to prove them sane for transfer to a maximum-security prison, or label them as incurable and recommend a death sentence under a new government act.

As Magnus delves into the darkness of the incarcerated minds, his own sanity is challenged. Secrets squeeze through the cracks of the asylum, blurring the line between reality and nightmare, urging Magnus towards a new life of crime…

The rural western town of Dortmund and its inhabitants are the backdrop to the mayhem on the hill.

It's Silence of the Lambs meets Shutter Island in this tale of loss, fear and diminishing hope.

5 things about the book

·         Unruly Patients
The facility in Dortmund Hibernate, known as Dortmund Asylum, is home to the nine criminally insane patients deemed most dangerous in the country. These cases are confined to Dortmund because they were found as unsuitable for both prison and all alternative mental health facilities. These individuals are too dangerous, too exploitative, too unstable to be around other people; especially other people classified as insane. As we explore their lives and their conditions, we are shown examples of what happens when they are out amongst society. The book coins the term “sickness” and our protagonist serves as a conduit between each person and their best possible outcome from this hell they have found themselves trapped within.

·         Guarding Demons
The patients are watched over by four key guards who work full-time on rotating rosters. They are the only people permitted to enter the cells; the psychologist can enter the seating section outside the bars but is given no key or access beyond that barrier. Walter Perch is the unofficial lead, the most suited to the role. Others include an ageing drunk, a friendly giant and a sassy lass. Together they form a tight unit. Can it last? This is posed as the patients try to exploit their relationships and find a way out of incarceration. We explore the four guards, their past and their coping methods. Not all are legal.

·         Rural Dortmund
Not to be confused with the thriving German city, Dortmund is a rural western town located seven hours from a city hub. With the main attractions being a zoo and a pub, Dortmund hangs heavy with the threatening Asylum stationed on the hill. The locals enjoy a drink at their watering hole and don’t always look favourably to outsiders, which is exactly what our protagonist is. Positioned within mountainous terrain and often under dark cloud, here is the perfect setting to escape the world. But many of our characters seek the opposite, to break free of its hold.

·         The Psychologist
Dr Magnus Paul is the protagonist of Dortmund Hibernate, sent to the asylum to make a recommendation on each case. He is renowned for his ability to cure minds from the “sickness” and his recent success made him the perfect candidate for the role at Dortmund Asylum. He carries the pain of losing two siblings to the “sickness” and has been trained to offer the best support possible to the minds in his care. Unfortunately for Magnus, he has never faced a task such as this in his professional career. The task of Jasper James alone has his mind racing. Is he afraid or excited? Not even the man himself can provide a definite answer.

·         The Motive
Magnus talks about his siblings when discussing his reasons for undergoing psychology as a profession. He wants to save people from the “sickness” which he believes is the reason he lost his sister and brother on one fateful night in an apartment. His sister was addicted to drugs and the men who could provide her with hits, and his brother was prone to violent outbreaks and torture when focused on an ideal. Despite their outcome, each plays a large role in the headspace of Magnus Paul, and as we learn more about his backstory the present is ultimately impacted. 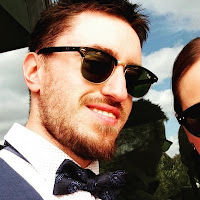 C.J. Sutton is a writer based in Melbourne, Australia. He holds a Master of Communication with majors in journalism and creative writing, and supports the value of study through correspondence. His fictional writing delves into the unpredictability of the human mind and the fears that drive us.
As a professional writer C.J. Sutton has worked within the hustle and bustle of newsrooms, the competitive offices of advertising and the trenches of marketing. But his interest in creating new characters and worlds has seen a move into fiction, which has always pleaded for complete attention. Dortmund Hibernate is his debut novel.
Social Media Links 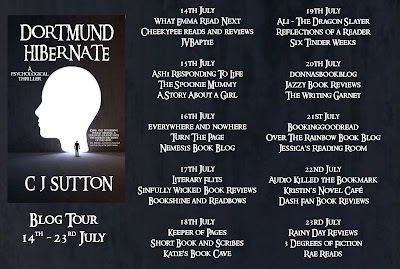