Thank you for stopping by I'm delighted to be one of the stops on the blog tour for The Kithseeker and sharing a Q&A with M.K. Wiseman today. First of all let's take a look at the description for the book... 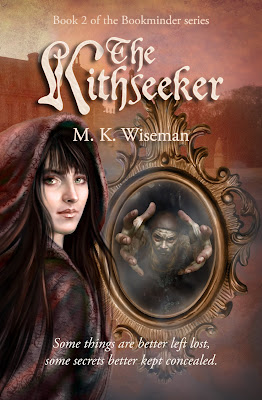 Liara's defense of the Wizard Nagarath has rendered Anisthe incantate--bereft of magick--but even this cannot guarantee her safety. Because the death of her father-in-magick would seal the girl's fate, necessity demands she and her wizard maintain a watchful eye on the war mage, while protecting her from his dark designs.

Anisthe has embarked on a journey across Europe, aided by his half-fey manservant with an agenda all his own. They search for a legendary mirror that contains the world's most powerful magick. Although the stuff of fairytales, the possibility of its existence compels Nagarath and Liara to seek the artifact themselves. Both know that should Anisthe lay claim to that power, Liara would be at his mercy and not even Nagarath could save her.

Thus, the pair find themselves at Versailles, surrounded by agents who ferret out magick users and destroy them. Uncertain who is friend and who is foe, with their rival on their heels, they must discover the mirror before Anisthe releases its evil, or worse, it lays claim to Liara's magick and brings doom upon them all.

Which three things do you enjoy doing when you aren’t writing?
Music (playing/jamming), fishing, & reading.

Which three books would you want if you were stuck on a desert island?
Laurie R King’s Monstrous Regiment of Women
Carol Kendall’s Gammage Cup
Jimmy Buffett’s Salty Piece of Land

Which three books were your favourite as a child?
Brian Jacques Mariel of Redwall
Louisa May Alcott’s Little Women
Carol Kendall’s Gammage Cup

Which three characters from any book would you have around for dinner?
Sherlock Holmes, Dirk Gently, & Gandalf
(And if I get to have them all over at once? Oh my gosh, this is the most hilarious thing I can imagine!)

Which three things most inspired this book?
My eternal love of wizards and fantasy,
love of libraries,
Croatian pride.

Which three emotions do you think your readers will experience while reading your book?
Affection, anxiety (sorry), & satisfaction.

Which three words would you use to describe your book?
Magical. Intricate. Intense.

M. K. Wiseman has degrees in animation/video and library science – both from the University of Wisconsin-Madison. Today, her office is a clutter of storyboards and half-catalogued collections of too, too many books. (But, really, is there such a thing as too many books?) When she’s not mucking about with stories, she’s off playing brač or lying in a hammock in the backyard of her Cedarburg home that she shares with her endlessly patient husband.