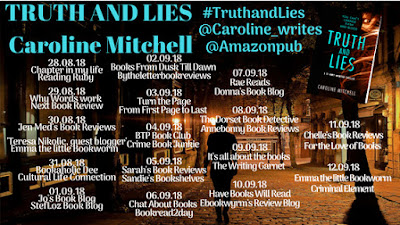 I'm thrilled to be one of the stops on the blog tour for Truth and Lies by Caroline Mitchell and sharing my review today. First of all though let's take a look at the description for the book... 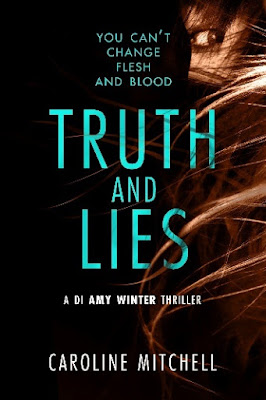 The adopted daughter of a highly respected police officer, DI Amy Winter, is keen to follow in her father’s footsteps. But when she receives a letter from the prison cell of Lillian Grimes, one half of a notorious husband-and-wife serial-killer team, Amy finds out something that sends her whole world into disarray.
Responsible for a string of killings decades ago, Lillian is nothing short of a psychopathic murderer. And also Amy’s biological mother. She tells Amy that she is ready to unveil the location of three of her victims, but only if Amy plays along with her sinister game.
While her fellow detectives frantically search for a young girl taken from her mother’s doorstep, Amy must confront her own dark past. Remembering an older sister who sacrificed herself to save her, Amy faces a race against time to uncover the missing bodies. But what if Grimes has been pulling the strings even tighter than Amy thought from behind bars? And can she overcome her demons to prevent another murder?
Buy Link

How do I start this review other than to say what a tangled web this story is! Truth and Lies is a story that left me glued to my Kindle and what a journey it takes the reader on! In this book we meet Amy who is a police officer just like her adoptive father and her career is going well. However she soon finds herself being confronted with her past in the form of the sinister and wicked Lilian who sends Amy on a path to discover the locations of three of her victims. A manipulator doesn't even half begin to describe Lillian, she really does send a chill down your spine!

I have to say that Caroline Mitchell had me fully immersed in the story. The way she wrote her characters was brilliant creating some dark and disturbing ones but also some likeable if troubled ones too. There was a whole different range of personalities in this book that just worked so well. Creating a well balanced out story that had so many elements from dark moments whenever the story focuses on Lillian to the investigation and Amy's team.

There is so much to this story that combines to bring some tense, dark and atmospheric moments that made me keep reading wondering how it would all end. Truth and Lies pretty much had me on the edge of my seat the whole way through along with making me sit up straight just waiting for the next surprise to surface. There were so many shocks in store for Amy who is a strong and determined character but was put under some pretty stressful situations.


A completely addictive and explosive start to a brand new series, I can't wait to see what will be in store for Amy next!

With thanks to Eleanor at Midas PR for my copy and invite to join the tour.

Shortlisted for a number of awards both in the US and in the UK, a USA Today bestseller and no 1 on Amazon in the US, Australia & the UK with over 30k followers on Twitter, a former police detective, Caroline Mitchell uses her in-depth knowledge of police procedures to create complex and suspenseful psychological thrillers. Caroline worked in CID and specialised in roles dealing with the vulnerable victims of domestic abuse and serious sexual offences. The mental strength shown by the victims of these crimes was a constant source of inspiration. A working mother of four, Caroline started writing due to the stress of dealing with such serious incidents and a way of processing the crimes she witnessed. Born and brought up in Ireland, she is happily married with four children and lives in Essex.