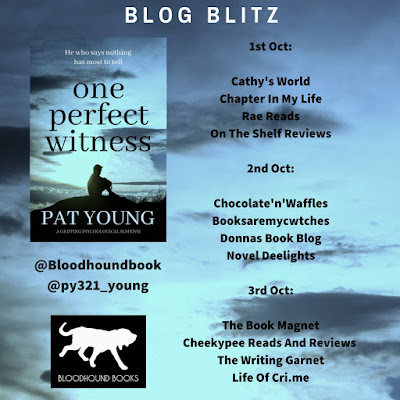 Thank you for stopping by I'm delighted to be sharing my review for One Perfect Witness by Pat Young as part of the blog blitz today. First of all though let's take a look at the description for the book... 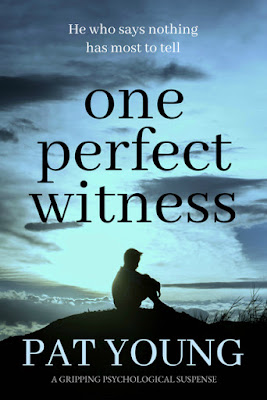 On a remote Scottish hillside, three paths meet. On each path, a boy, one carrying a gun.

When their paths cross, a shot is fired and a boy dies.

That leaves two - one killer and one perfect witness.

This killer will stop at nothing to make sure the witness says nothing. Difficult for most people, even for someone who's been guarding a secret of his own for five years.

What if the witness decides he's been silent too long?

Sometimes even the unspeakable must be spoken, if we can find the words.

I have to start by saying that the beginning of this book easily grabbed hold of me, now it wasn't necessarily with a bang but it was the way that Pat Young introduced her characters to me. It was easy to picture them but also you know that something big is about to happen. The story also has a dark underlying tension which constantly had me wondering what would happen next.

I have to admit that I'm trying to be as vague as I can regarding the plot but what I will say is that this book is full of surprises and I was definitely kept on my toes! Throughout there is a steady pace and the characters easily kept me invested in the story especially Charlie's character, I found him so engaging. As we see him cope with the consequences of what happened that day.

The setting of the story was a hit for me, I haven't been to that part of Scotland but it was described in a way that I could see it clearly and it really helps to set the scene. This story made me think about coincidences, being in the wrong place at the wrong time and also the way our actions can set us on a very different path.

A compelling story that will grab hold until the very last page!

With thanks to Bloodhound Books for my copy.

Pat never expected to be a writer. Then she found a discarded book with a wad of cash tucked in the flyleaf. ‘What if something awful happened to the person who lost this book?’ she thought, and she was off.

Pat knew nothing of writing, but she knew a thing or two about books, having studied English, French and German at Glasgow University. A passion for languages led to a career she loved and then a successful part-time business that allowed her some free-time, at last.

Pat had plans, none of which included sitting at her desk from daybreak till dusk. But some days she has to. Because there’s a story to be told. And when it’s done, she can go out to play. On zip-wires and abseil ropes, or just the tennis court.

Pat writes psychological thrillers. Her debut novel Till the Dust Settles, has been awarded the Scottish Association of Writers’ Constable Stag trophy. Following publication in July
2017 Pat was delighted to be chosen as an ‘emerging talent’ for Crime in the Spotlight and read from Till the Dust Settles to an audience at Bloody Scotland – another dream come true.

Published by Bloodhound Books, I Know Where You Live is the much-anticipated sequel to Pat’s gripping and unmissable debut thriller, Till the Dust Settles. It too is a psychological thriller with a skilfully told story that makes for an enjoyable stand alone read. It will hook you from the start.

One Perfect Witness, Pat’s third novel to be published, tells a completely new story. If, like Pat, you’re fascinated by what happens when someone disappears, you’ll enjoy this book of secrets, lies and deception.