I'm delighted to be one of the stops on the blog tour for Strand of Faith as Rachel J Bonner kindly takes part in a little Q&A! There is also a giveaway to enter but first of all let's take a look at the description for the book... 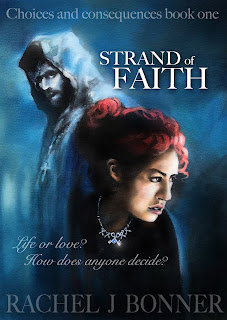 When the choice is between love and life, how can anyone decide?

A girl and a monk, both with extraordinary mental powers, have compelling reasons not to fall in love.  But those from whom they expect support are manipulating them both because their choices will have consequences for the rest of the world.

After a stormy youth, Brother Prospero has found comfort and fulfilment in the monastery.  That is, until he discovers something that forces him to reconsider his whole vocation.  To follow his heart, he’ll have to face his demons again, outside the security of the monastery. Is it worth the risk?  Can he beat them this time? Or will they finally destroy him?

Orphaned and mistreated, Leonie has found sanctuary and safety at the abbey.  All she wants is to learn how to manage her unusual abilities so that she is not a danger to those around her.  When she comes into contact with Prospero everything threatens to spiral out of her control.  Whether she leaves or whether she stays, how can she possibly avoid destroying – yet again – those she has come to care about?

Abbot Gabriel is faced with an impossible choice.  He can do nothing and watch the world descend into war.  Or he can manipulate events and ensure peace – at the cost of two lives that he is responsible for.  He knows what he has to do but is he strong enough to sacrifice those he loves?

I don’t particularly have places I go back to – I like to see different places, but

They are three strong women who face difficult situations but aren’t going to be daunted.  It would be an excellent girls’ night, but if any of them wanted to bring their partners I certainly wouldn’t complain.

Rachel J Bonner is the author of the four book Choices and Consequences series, the first of which, Strand of Faith, is due out in November 2018.

Getting a degree in engineering, followed by a career in accountancy is probably not a conventional path to becoming an author, particularly in paranormal romance.  Rachel says that, although accountancy isn’t anything like as boring as everyone thinks, writing is a lot more fun.  When not writing, she can be found walking in the beautiful countryside near where she lives, which has influenced much of the scenery in her books, or shooting things with her local archery club.  Target shooting only, honest.  Nothing to worry about.

She also enjoys swimming, eating chocolate chip cookies and growing aromatic herbs, especially thyme and rosemary.  It’s no coincidence that her heroine likes the same things.
You can find out more about her books and sign up for Rachel’s newsletters at

Win a signed paperback copy of Strand of Faith, a set of bookmarks (3 styles plus a business card) featuring the cover art, and a canvas print (40cm by 30cm) of the original cover art.

*Terms and Conditions
Worldwide entries welcome.  Please enter using the Rafflecopter box below.  The winner will be selected at random via Rafflecopter from all valid entries and will be notified by Twitter and/or email. If no response is received within 7 days then I reserve the right to select an alternative winner. Open to all entrants aged 18 or over.  Any personal data given as part of the competition entry is used for this purpose only and will not be shared with third parties, with the exception of the winners’ information. This will passed to the giveaway organiser and used only for fulfilment of the prize, after which time I will delete the data.  I am not responsible for despatch or delivery of the prize. 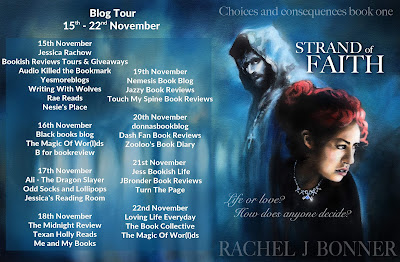