When Sky’s parents moved from San Francisco to Boulder City in Nevada, she thought her life was over, until she met the Hudson boys. Two years older than her, tattooed bad boy Nate was confident, cocky, good looking, and a straight talker. He was the unattainable guy that all the girls wanted, but the one their fathers warned them to steer clear of. Josh had all of his brother’s looks, but he was the sweet charmer your mother would beg you to marry. Their cousin Billy lacked the brothers’ good looks, so relied on his quick wit to attract the girls.

When all three of them set their sights on Sky, they became competitive, and cracks in their close bond began to form.

Torn between her loyalty to all three, and feelings for one, Sky was faced with a dilemma.

When she made her decision, she had no idea that her choice would set them all on a path that would tear the group apart. 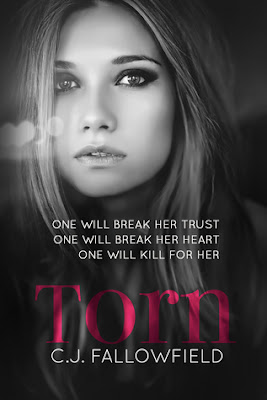 The characters in this book were well written and I felt like I really got to know them. At times I did want to shake Sky but she was young and inexperienced with her emotions. The chemistry that Nate and Sky shared was pure fire, the pages definitely sizzled!

Torn kept me on my toes and I felt a range of emotions whilst reading. Sadness was definitely one of them especially as I was in tears near the end! The story moved at a good pace with something always happening. One of the things I really liked was that the story wasn't just about romantic love. It was also about family and friends and how their relationships are tested to the limit.

Both the story and the characters were well written. I really enjoyed reading Torn, I definitely got attached to Nate, Sky and Josh which meant it was sad to say goodbye.

It would be great to read more books by C.J. Fallowfield.

Torn is both hot and passionate but also a story of love!

Thank you to C.J. Fallowfield for my copy in exchange for an honest and unbiased opinion.
at August 10, 2016