I am so pleased to be taking part in the blog tour for Nice Day for a White Wedding. It is the second book in The House on Camden Square series by A. L. Michael.

So first of all let's look at the book, then an excerpt and my review. Then lastly there is a lovely giveaway to enter!

Sometimes, Happy Ever After is where the real trouble begins…

Chelsea Donnolly wasn’t supposed to amount to anything. But if there’s one thing the bad girl from the estate liked better than trouble, it was a challenge. So, to the amusement of her best friends Evie, Mollie and Ruby – and the disbelief of her teachers – this bad girl turned good.

These days, Chelsea is the kind of girl people are proud to know – and, after a surprise trip to Venice, she has a ring on her finger to prove it. But to get there, she’s had to learn to keep her deepest secrets from everyone – even her fiancé. And when wedding preparations threaten to blow her cover, Chelsea can’t help but wonder: in her battle to the top, might she have left the best parts of herself behind? 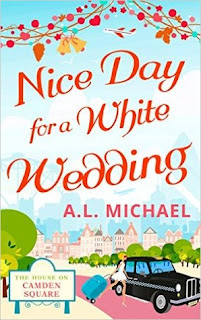 ‘So…dinner starts early,’ Chelsea said, finishing her make-up in the mirror, watching with the slightest bit of longing as Kit buttoned up his shirt.

‘Woof,’ she said sadly, looking down at the sparkling ring on her finger.

He reached for her hand, twirling her beneath his arm as they walked along, the dark blue dress swirling around her ankles.

‘Into the lion’s den we go,’ Kit laughed, kissing her cheek.

‘I thought they were dogs a minute ago?’

‘Dogs, big cats, whatever.’ He shook his head. ‘Things with teeth.’

They walked down the stairs, delicious smells rising through the house, the sound of Jem’s brash laugh echoing as they got closer.

‘They’ll be in the bar.’ Kit led her through the empty kitchen, lit only by candles.

‘The bar, of course.’ Chelsea rolled her eyes. ‘So, where’s all this cooking going on?’ Chelsea gestured around them.

Kit dipped his head. ‘Okay, don’t make a face but…’

‘This is just the family kitchen.’

‘Yeah, ’cause, well…there’s a lot of us, and a lot of food, and this is quite a small kitchen…’ Kit shrugged, nodding towards the state of the art American fridge freezer, the gleaming marble surfaces and the six-burner hob with two ovens. The kitchen was almost bigger than Chelsea’s studio.

‘Right.’ She stood there, looking at him, trying to find something to say. Something that wasn’t ‘Aren’t you disgusted by all this? Isn’t it just too much?’

Jemima breezed in, empty wine Champagne flute in hand. ‘Don’t look so impressed, darling. You’ll give yourself away.’

Chelsea’s neck almost snapped as she turned to look at her future mother-in-law, hitting the nail on the head entirely. It was the first rule. Never seem impressed. The only way they’d think you were rich was if you had never even considered that their lifestyle might not be available to everyone. Don’t let them see you’re impressed. The first rule. And she’d broken it over a kitchen. One client once showed her a picture of her pet tiger, and she was impressed by a second kitchen?

‘What?’ she said breathlessly, waiting for Jemima to go in for the kill.

The older blonde lady looked at her in confusion. ‘I was talking to Christopher, looking at you like you’re the best thing since sliced bread. He’s giving himself away, it’s never good to be too impressed by your partner.’

‘Why not?’ Chelsea asked, sharing an amused look with Kit.

‘Not Alistair?’ Chelsea asked, linking her fingers with Kit’s as they followed his tottering mother through to the living room, full of soft white furnishings and a huge chandelier, and down some steps to another room, all wooden but with huge windows that went from floor to ceiling, looking out over the lake. Even in the dull light of the early evening, Chelsea could see the overwhelming blue of the water, the greenery surrounding it, the colourful little boats bobbing in the harbours.

‘Dad’s probably showing off for your benefit. Don’t drink it to be polite, the man has no taste buds and I’m not sure he’s been able to judge appropriate measurements since the early 80s,’ Kit whispered, his breath tickling her neck.

I really enjoyed reading Goodbye Ruby Tuesday which is the first book in The House on Camden Square series. So I was wondering if the next book in the series would be just as good.

My attention was caught straight away and I felt as if no time had passed since reading Goodbye Ruby Tuesday, it was like revisiting old friends. I have to admit in the first book it took me a while to take to Chelsea. I felt more of a connection to Mollie and Evie out of the three friends but that all changed when l I started reading her story. This time I connected with Chelsea pretty much from the start especially as the book delves into her past.

Kit is another great character and their relationship is well written. As they have issues relating to their pasts I was worried about if they were totally suited. However when they are together they really are perfect for each other. I had my fingers crossed for a happy ending for them.


The friendship between the three girls is one of the best things about this series. However because Chelsea is in Italy you don't get the face to face conversations. Although when they do get to talk I loved their interactions. Some of my favourite parts of this book are actually the flashbacks to Ruby and Chelsea's friendship. I loved the snippets of their friendship and I thought they brought something really special to the story.

The story moved at a good pace and the first time I picked the book up I must have read for an hour without even realising. I became immersed in the story and enjoyed spending time with Chelsea. Especially discovering all about her past and how far she has come.

Even though this book is part of a series it could be easily read as a standalone. Although it is such a fun series that I would definitely recommend reading Goodbye Ruby Tuesday too.

The House on Camden Square series just gets better and better!

I loved Chelsea and her feisty personality and I can't wait to read the last in the series and find out what will happen to Mollie.

Nice Day for a White Wedding has great friendships, romance and lots of charm!

Thank you to Neverland Blog Tours, A. L. Michael, Carina UK & Netgalley for my copy in exchange for an honest and unbiased opinion. 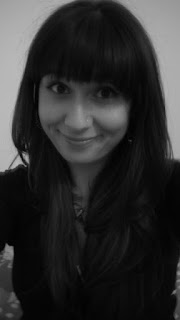 A.L. Michael is hurtling towards the end of her twenties a little too quickly. She is the author of 'Wine Dark, Sea Blue', 'The Last Word', 'My So Called (Love) Life', 'Driving Home for Christmas', and 'If You Don't Know Me By Now', based upon her experiences as a London barista.

Her new three book series, The House on Camden Square, starts with 'Goodbye Ruby Tuesday' and focuses on three friends as they try to open an arts centre in Camden, in memory of their rock star friend.

She is a Creative Therapeutic Facilitator, currently researching the power of creative writing to be helpful in recovering from eating disorders, and likes running writing workshops that link together the body and the mind. When she's not writing, she likes yoga, trying to bake healthy treats and was a hipster before hipsters were hipster. Well, she likes Chai lattes and owns a Mac.

Why not follow along with the rest of the tour! 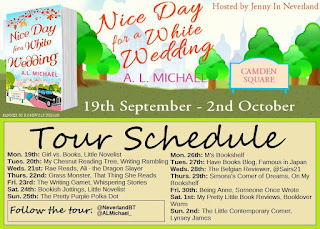