Rae reads is 1 year old and a book review of Who's Afraid of Mr Wolfe? by Hazel Osmond

Hi everyone, it's my 1 year blog anniversary, YAY!!!

Officially it was my Blogaversary on the 3rd December but with illnesses and two little ones to run after this blog post is coming a little late!

I can't believe how fast this year has gone, seriously where the hell did it go! This year hasn't been perfect and it could have been a lot better but it could also have been much worse.

I have pretty much enjoyed every minute of my year of being a book blogger. Special thanks have to go to all the lovely authors, publishers and fellow book bloggers who have made running my blog a delight!

So my main thought was how to celebrate the anniversary of my blog. In the end as it's a book blog I decided to write a review of one of my favourite books. I know it's not a super exciting blog post but I really do love this book and I have read it quite a few times. However I realised a few months ago that I hadn't written a full review for it. This was partly because I was worried I wouldn't be able to do the book justice. Well here goes... 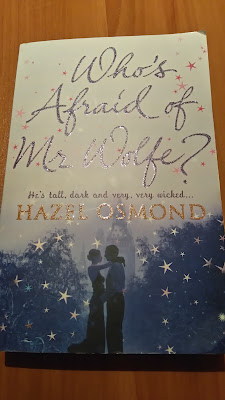 Who's Afraid of Mr Wolfe? by Hazel Osmond


Ellie Somerset loves her career-obsessed boyfriend Sam and she loves her job as an advertising copywriter. But Sam is always at work and her fresh ideas keep being overlooked.

Her life gets more complicated when new boss Jack Wolfe – Heathcliff in Jeans – arrives at the agency. With his brooding good looks, trademark scowl and plans for change, he challenges Ellie to smarten up and prove herself.

To Ellie's horror, she finds herself both repelled and attracted to the sexy and dangerous Jack. But this particular wolf has an awful lot to hide...

You can buy your copy here

So first all I have to mention that one of the things that draws me to this book time and again is the characters especially Jack. He is a complex and at times a very frustrating character. There are a few points in this book when I could happily throw something at him. However this is just the tip of the iceberg and when all is said and done he has an appeal that as the book progresses intensifies. He is at times brooding and wears a mask to cover his emotions but there is a hidden depth to him, I can totally see the appeal!

I love that Ellie is pretty much like your typical girl next door and for the most part happy in her own skin and I really liked that about her. Ellie isn't perfect either and her flaws are probably a little like my own such as not standing up for herself as much as she should and just sitting back and accepting things. When instead she should find her voice and say when something isn't right.

Both characters evolve during the story and Hazel Osmond wrote their development brilliantly. Their interactions are both fun and fiery at times which I love. Ellie finds herself constantly battling Jack and they share some pretty explosive moments. There is tension and passion between Ellie and Jack that nearly make sparks fly off the pages.

Another stand out character is Edith who is Ellie's Great Aunt and they had such a loving relationship that it was a pleasure to read. Edith is such a fun and vibrant person and that comes across so well especially during Scrabble. A Scrabble game that consists of Edith trying to find the most filthiest words she can!

The story itself is witty and fun but there is also plenty of emotion packed into this book. I always end up engrossed in the story and it's characters. Even after reading Who's Afraid of Mr Wolfe numerous times I still find it enjoyable. I love that I don't always love the characters a 100% whilst reading especially Jack. However I do think that this definitely makes them more realistic and believable.

I am so glad that I picked up this book all those years ago it is charming, romantic and very entertaining!

A fully deserved 5 stars from me!

If you have read Who's Afraid of Mr Wolfe it would be great to let me know what you thought.

Is there a book that you have read more than once or do you prefer to just read a book and move on.