Thank you for joining me today, this is my second stop on the Blog Tour for The Den of Iniquity by Anabelle Bryant.

You can catch my review here from my previous stop on the tour.

So let's take a look at the book and then you can read on for a great guest post by Anabelle Bryant. 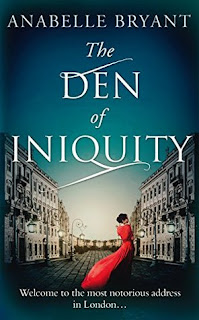 Welcome to the most notorious address in London…

Beneath the airs and graces of the Ton lies The Underworld – London’s most scandalous gambling hall.

The only thing darker and more debauched that the hall itself? The proprietor, Max Sinclair. As mysterious as the corners of the city he stalks, Max has vowed to take revenge against the men who murdered his mother. And The Underworld attracts London’s darkest characters – the perfect partners in crime.

But when Lady Vivienne Beaumont enters The Underworld, Max’s life becomes more dangerous than he ever thought possible.

Enter a world of lust, lawlessness and obsession with The Den of Iniquity, the first in Anabelle Bryant’s Bastards of London series.

The Underworld Gaming Hell ~ Men at the Club

The Bastards of London series revolves around the Underworld Gaming Hell, a Regency version of an exclusive casino. Unfortunately for women, it was only the men who were allowed to go clubbing during this time period, and that double standard provides wonderful fodder for me as a romance author. My heroines are strong, independent thinkers. They often want exactly what a man wants within the story, but on different terms, more elevated terms.

Clubbing during the Regency is nothing at all like the music pounding experience of today. While there was plentiful liquor, attendance was limited and often required a voucher or special license. Respected clubs such as White’s, Boodles and Brook’s, were only for the elite and entitled. Belonging to one of these clubs brought with it popularity and prestige. There were open corridors and large bay windows. People wanted to be seen.

The Underworld is nothing like that. It’s run by a trio of bastards who were raised on the streets of the slums and elevated themselves through shrewd business and savvy association, to the level of ownership. Together, they created a world where anyone is welcome as long as there is money to be spent. Their view of exclusivity encompasses a different element.

Gaming hells are occasionally visited in Regency romance as a place to gamble money, but in my series, emotions, promises of the past and sensual love scenes all enter into the plot through the hell. It’s symbolic in a series of ways, not just for the men who run it, but for the women who dare to visit.

I hope you stop by the Underworld and visit Max, Cole and Luke. My heroes are waiting for you. 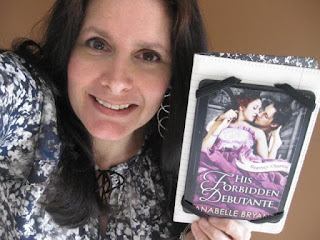 Anabelle Bryant is the bestselling author of seven historical romances. Her love of writing keeps her busy in front of her laptop when not in front of a classroom or traveling, her favorite preoccupation.

Thrilled to be writing for HarperCollins, Anabelle’s Regency Rogues trilogy and Regency Charms quartet are bestselling collections. Her historical romances are high concept, character driven stories which provide a heartfelt connection between hero, heroine, and the reader, believing the emotional journey on the path to true love is the most important bond.

The Den of Iniquity is book one in her newest series, Bastards of London, an edgier look at the Regency. Anabelle enjoys hears from readers and talking all things bookish.