Thank you for joining me on the Blog Tour for Brake Failure by Alison Brodie. I have a lovely guest post from Alison Brodie for you today, along with a great giveaway to enter!

I previously reviewed Brake Failure and it really is brilliant. If you get chance you can take a look at my review here. 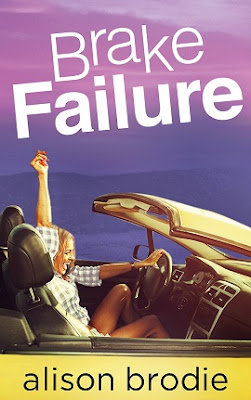 Brake Failure is a contemporary romance with humour, suspense and a kick-ass heroine.  The story is set in one of the most fascinating periods of America's history:  the months leading up to Y2K "melt-down."
"Is it too late to tell him you love him when you're looking down the barrel of his gun?"
Ruby Mortimer-Smyth is an English debutante, destined for Ladies Day at Ascot and taking tea at The Savoy. She knows the etiquette for every occasion and her soufflés NEVER collapse.
She is in control of her life, tightly in control.  Until fate dumps her down in … Kansas.
Ruby believes that life is like a car; common-sense keeps it on the road, passion sends it into a ditch. What she doesn't know is, she's on a collision course with Sheriff Hank Gephart.

Sheriff Hank Gephart can judge a person.  Miss Mortimer-Smyth might act like the Duchess of England but just under the surface there's something bubbling, ready to explode.  She's reckless, and she's heading for brake failure.  And he's not thinking about her car.

With the Millennium approaching, Ruby gets caught up in the Y2K hysteria.  She joins a group of Survivalists, who give her a gun and advise her to stockpile basic essentials, such as gasoline and water-purifying tablets.  So she bulk-buys Perrier, Gentleman's Relish and macaroons.
Ruby, far from home, is making Unsuitable Friends and "finding herself" for the first time.  She falls in with a gang of Hells Angels and falls foul of the law.  At every turn, she comes up hard against Sheriff Hank Gephart, whose blue eyes seem to look deep into her soul.  She desperately wants him but knows she can never have him.
She's angry at the emotions he arouses in her.  Pushed to her limit, she bursts from her emotional straightjacket.

As the clock strikes midnight of the new Millennium, she's on a freight train with three million dollars, a bottle of Wild Turkey and a smoking gun.
What happened to Miss Prim-and-Proper?   And why did she shoot Mr Right?
Note:  Alison Brodie wrote this story from first-hand experience.  She lived in Kansas during this time and was stunned by the hysteria, unnerved that the US government was spending $150 billion preparing for Armageddon.  As Lionel Shriver says in her novel, We Have To Talk About Kevin:  “1999, a year widely mooted beforehand as the end of the world.”
Buy Links

MY INSPIRATION FOR BRAKE FAILURE

Brake Failure is a romance set in Kansas during the months leading up to Y2K “meltdown.” It was so easy to write because most of everything that happened in the book happened to me. I guess you could call it a memoir.
The feisty heroine came fully formed in my mind, along with her name, Ruby. So did her nemesis, Sheriff Hank Gephart. I know I shouldn’t admit this but - the other characters I took from real life.
Like me, Ruby wanted to live in Paris, but ended up in Kansas City. Like me, she was devastated. “The City of Lovers versus the City of Leftovers.” That’s how I initially thought of Kansas. How wrong I was!
It really is one of the most cultured places I have been to. It has more working fountains than any other city on the planet. I’m not talking about a trickle of water coming out of a spout, I am talking about huge, magnificent cascades crashing down on enormous prancing stone horses.
I live in France now – “the cuisine capital of the world” – but I have never had as juicy and tender a steak as I had in Ruth Chris’s Steak House. And the BBQs! OMG…!
Anyway … *mopping the saliva off my keyboard* … I assumed Kansas was flat; instead it rolls and undulates with hidden sandy coves and vast sparkling lakes. Shawnee Mission Lake was where Sheriff Hank Gephart caught Ruby in only a pair of silky briefs and a shrivelled bikini top. (She was wearing them, not Hank).
I didn’t transform Ruby from Miss Prim-and-Proper to Hell-Hound. She did it herself. Well, it was Hank. He brought emotions up in her she couldn’t handle. I guess she was angry at him for the power he had over her. She wanted to stay in her “safe” marriage; to be in control; but by the end of the book she totally goes off the rails.
The final – and major – event in the book actually happened. (I won’t give away the plot). To prove it, I still have The Kansas City Star newspaper from 2 Jan, 2001.
I researched the history of Kansas to give some background to Brake Failure. Fascinating stuff! It was called Queen of the Cow Towns where Wyatt Earp hung out. It was from here the early settlers trekked across America to forge new lives. I thought of all those women who set off on the Santa Fe Trail carrying babies, surrounded by young children … going into the unknown…
I certainly didn’t have to suffer deprivation like those early settlers. I had GADGETS: an icemaker in the fridge (never heard of in England at the time), a trash compactor (I loved shoving stuff down in to hear the noises it would make) and Coca Cola coming out of a tap!
So what was the Good, the Bad and the Ugly about Kansas?
The Good has to be the handsome cowboy-types with the fabulous Kansas accent. The Bad was the tornado that hopped over our house and demolished the Toyota garage. And the Ugly? Well, it has to be Mr Schoettler waking me up with the cock …
?? You have to read the book. 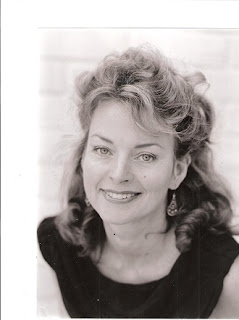 Alison Brodie is a Scot, with French Huguenot ancestors on her mother’s side. Alison was a photographic model for a wide range of products, such as Ducatti motorbikes and 7Up. She was also the vampire in the Schweppes commercial.

A disastrous modelling assignment in the Scottish Highlands gave Alison an idea for her first romance novel, Face to Face. It was taken up by Dinah Wiener, the first agent Alison sent it to. Three weeks later, Alison signed a two-book deal with Hodder & Stoughton. Subsequently, Face to Face was published in English, German and Dutch. “Vain, but wildly funny leading lady.” -Scottish Daily Mail. It was also chosen as Good Housekeeping’s “Pick of the Paperbacks.”

Unfortunately, Alison then suffered from Second-Book Syndrome. The publisher’s deadline loomed but Alison couldn’t think of a story! She found the whole experience a nightmare; and this is why she cautions first-time authors not to sign a multi-book deal unless they are prepared!
Alison lived in Kansas for two years. She loved the people, their friendliness, the history and the BBQs! Now, she lives in Biarritz, France with her rescue mutt, Bayley.

Alison’s previous release, THE DOUBLE, was published to rave reviews: