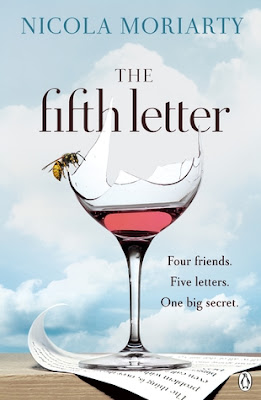 Joni, Trina, Deb and Eden.Best friends since the first day of school. Best friends, they liked to say, forever.But now they are in their thirties and real life - husbands, children, work - has got in the way. So, resurrecting their annual trip away, Joni has an idea, something to help them reconnect.Each woman will write an anonymous letter, sharing with their friends the things that are really going on in their lives.But as the confessions come tumbling out, Joni starts to feel the certainty of their decades-long friendships slip from her fingers.Anger. Accusations. Desires. Deceit. And then she finds another letter. One that was never supposed to be read. A fifth letter. Containing a secret so big that its writer had tried to destroy it. And now Joni is starting to wonder, did she ever really know her friends at all?

The first thing that drew me in was definitely the cover it looked just that little bit sinister. After reading the description I was intrigued and had to read it! So what did I think...

First of all I have to say that the characters weren't always 100% likeable but I thought this was a good thing as it allowed me to give each character a chance. Rather than liking one character and being biased against the others. It was interesting getting to know this group of friends especially their secrets and hidden emotions.

Friendship is a key feature in this story and I enjoyed the dynamics of this group of friends. It was a great story showing how even the best of friends can have varying degrees of secrets. Keeping their feelings well and truly to themselves and showing a different side to their friends and family. I can totally understand how the group aren't as close as they once were. Life definitely gets in the way and most people change as they grow older too.

There were a few surprises along the way and I just had to keep reading to find out who wrote that fifth letter. The story flowed pretty well and I wouldn't say that there were really any slow parts. As I was reading I was trying to pick up on things that may give me an idea as to the identity of the fifth letter writer. Nicola Moriarty has done a great job of revealing enough information to keep me invested in the story without giving the game away too early.

The book does fluctuate between the holiday and the present as Joni is telling her story. This gives an interesting spin and helped keep up the suspense as to what was happening.

I will admit to expecting more of a darker edge to the story but this didn't really happen as such. So I guess if you like a more sinister story to unfold than you could be a little disappointed. Overall The Fifth Letter is a very entertaining story packed full of heartache, lies and secrets slowly building up until the big revelations are revealed!

Intriguing and full of secrets!

Thank you to Penguin UK & Netgalley for my copy. This is my honest and unbiased opinion.