There is also a fab giveaway to enter! 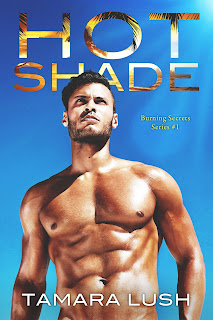 Blurb: In the tropical Florida heat, a man with deadly secrets falls for a lovely, inquisitive reporter...

After Luca Rossi lost everything to the Italian mafia, he used all his skills to write a stunning expose, and managed to put a key don on trial for his life. But now Luca must hide out on the Florida coast until justice is served in Italy. All is well, until he meets a lovely young American reporter who won’t stop asking questions about who he is. Soon he’s fighting the urge to hush her with a kiss … and much, much more.

Skylar Shaw took a job with a small Florida paper determined to make her mark on the journalistic world. She may spend her days writing up alligator scares and human interest stories, but when she meets a handsome mystery man on the beach, she’s not afraid to dig into his past, and the danger stalking him from across the seas. There’s just one problem … will her efforts help Luca, or bring danger straight to him?

Luca knows all too well the journalistic drive to keep digging. Can he trust his lovely Skylar to keep his secrets, or must he push her away to save both their lives? 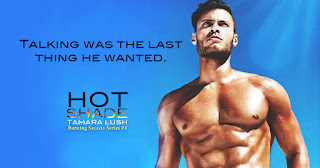 The idea for Hot Shade has been in my brain for a few years. As a journalist with The Associated Press, I've covered some of the most tragic news stories imaginable. The Haiti earthquake. The Gulf oil spill. Too many murders to count.

I wanted to tell a story with a happy ending. And yet, I was fascinated by darker tales of intrigue and suspense. And I also love the New Adult genre, with its coming-of-age stories.
What to do? How to combine these elements swirling in my head?

My main inspiration was a real-life Italian journalist named Roberto Saviano. He wrote the investigative book, Gomorrah (which was also made into a movie). After he published the book, he received death threats from the Mafia and he's since gone into hiding, with bodyguards. He's an incredibly brave man, and I wanted my hero, Luca Rossi, to exhibit the same kind of crusading, truth-telling bravery.

I also wanted Luca to be offered the one thing he wants, but doesn't think he deserves because of his circumstances: love.

The heroine, Skylar Shaw, is like many young reporters. Ambitious, a little naive to the ways of the world and eager to learn. She's also grappling with body image issues and a past abusive relationship.

I'm a longtime romance reader and love books with intrigue and sensual tension. I also couldn't shake off my years of covering all kinds of crazy news stories in Florida. I began to wonder: What would happen if a young, rookie reporter met a hot Italian man while covering a story, then fell in love? What if the Italian was hiding a big secret? What if the Italian was also a journalist, but couldn't tell anyone because he was running from danger? What if danger was lurking in the bright Florida sun, not far from where the hero and heroine were falling in love?

This was my debut novel, and initially published with Boroughs Publishing Group in 2015. I’ve since gotten the rights back and am indie publishing it with a new cover. I hope readers enjoy the story!

To find out more, you can visit me at www.tamaralush.com. 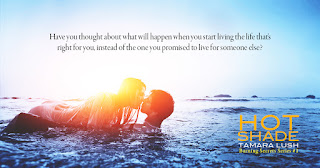 About the author: Tamara Lush was born in California and raised in Vermont. She graduated from Emerson College with a degree in broadcast journalism. For the last several years, she’s worked as a journalist and is currently a correspondent in Florida with The Associated Press. She lives with her Italian husband and two dogs on the Gulf Coast.

She was recently chosen as one of 24 writers for the Amtrak Residency program, and in 2017, she'll be riding trains and writing romance.

Published in September of 2015, her debut novel HOT SHADE received four stars from RT Book Reviews. Her most recent novel, a five episode serial called TELL ME A STORY, has "an engaging voice, sexy heroes and heroines and a wry sense of humor,” according to New York Times bestselling author Beth Kery.

This giveaway is for a $10 Amazon gift card (or equivalent)