I am delighted to be one of the stops for this fab weekend blitz for Blood Bank by Zoe Markham. Today I will be sharing my review for this dark and intriguing story. First of all let's take a look at the description for the book... 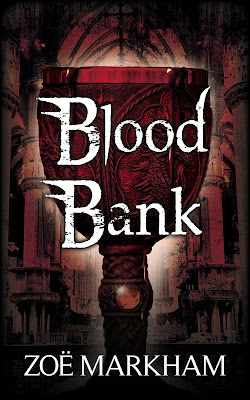 Benjamin is a programmer moonlighting as a security guard at Dystopia, a seedy club that caters to the down-and-outs, the desperates, the addicts. He's been building his reputation, saving for a way out - but when he rescues a young woman from the nearby estate, he may just have stepped too far out of line...

Lucy is ordinary; a girl with a deadbeat boyfriend, a normal life and college studies. But when her world takes an odd twist, she starts to wonder about the people she's meeting, the situations she's in, the odd aversions and attacks happening around her. They're just coincidences...aren't they?

And Zack is in deep trouble. He's losing his girlfriend, drowning in debt, and has dwindling job prospects - and that's not the worst of it. His debt is to people who won't ever forget it, and who want the things closest to Zack's heart: his blood - and his life.

In the heart of Swindon, an ancient order hides in plain sight, spreading their influence through the streets like a disease. But despite their widespread power they are catching up with the modern world: the vampires are going online, and the Order is about to become more powerful than even they would have dreamed...

I have to admit it's been a while since I read a book with vampires in so as soon as I read the description for Blood Bank I knew I had to read it. There are lots of books that feature vampires and they vary in their darkness from the fluffier versions right through to darker gorier styles. I guess Blood Bank sits more towards the darker side which I guess I do prefer.

Ben is an intriguing character and has that darker edge but also that good guy vibe that is such a great contrast. The three characters of Lucy, Ben and Zack worked well together and it was probably just the right amount of characters to follow for the length of the story. Zack has his flaws with all the mistakes he has made however he tries to do his best with what little control over his life he has left. Lucy is completely stuck in the middle and has just found herself caught up in a crazy situation. You understand her feelings for Zack but also anger at the danger he has brought into their lives.

I really liked the idea of the debt it was an intriguing way of introducing the vampires and giving such a hopeless position to find yourself in. The story moves pretty quickly as we follow Zack and discover the true extent of the trouble he has found himself in along with his loved ones. Within no time at all I found myself nearing the end of the book along with hoping that the characters would find a way out of the various situations they had found themselves in.

Blood Bank has a great combination of danger, darkness and vampires!

With thanks to Jenny at Neverland Blog Tours & Zoe Markham for my copy. This is my honest and unbiased opinion.

Mild-mannered editor by day, puppet-master of broken souls by night.