Thank you for joining me I'm delighted to be sharing my review of Little Gray Dress by Aimee Brown. There is also a fab giveaway to enter but first of all let's take a look at the description for the book...

Emi Harrison has avoided her ex-fiance, Jack Cabot, for nearly two years. Her twin brother Evan’s wedding is about to end that streak. From bad bridesmaid’s dresses, a hyperactive sister-in-law, a mean girl with even meaner secrets, and too much to drink, nothing seems to go right for Emi, except when she’s wearing her little gray dress. When she speed-walks into Liam Jaxon’s bar, things get more complicated. He’s gorgeous, southern, and has no past with Emi. He may be exactly what she needs to prove for the last time that she doesn’t need or want Jack! Her favorite little gray dress has made an appearance at nearly every major event in Emi’s adult life. Will it make another when she least expects it?

I loved the alternating timelines within this story I thought that it was a lovely and different way of telling Emi and Jack's story. This way we delve into their past and see where it all started and then went horribly wrong. I have to say the way they met made me smile it was funny, adorable and sweet all rolled into one. Sometimes when a story has multiple time periods it can all get a bit confusing but the way it is spaced is perfect for moving the story along. It really did enhance the story telling for me.

It was so easy to get attached to Emi, she is down to earth and I really felt for her situation of having to be a bridesmaid at a wedding and also seeing your ex too. Definitely not the best situation to be in but of course Emi has her little gray dress. There are various characters within the story all with different personality traits from kind, supportive and loveable right through to the downright nasty. One person in particular was so easy to hate and really has no redeeming qualities. The two men in this book both have good qualities but in different ways and I thought that the way Aimee Brown wrote them was great.

I really did get caught up in the story it was so entertaining especially when Emi is thrown into some pretty awkward and awful situations. I did have to cringe at some of the embarrassing things that happened to her. I loved how she held her head up high and carried on with strength that I'm not sure I would have had in the same situation.

So onto the ending well I have to say that for me it is pretty perfect and I may have had a few tears in my eyes but they were definitely happy tears! Aimee Brown has written a heartfelt story that had a dash of romance running through. Little Gray Dress had me hooked from the start and I actually read it in one go. Mainly because I just had to know what happened in Emi and Jack's relationship and of course how it would all end.

This is a wonderful debut and I really can't wait for Aimee Brown's next story.

With thanks to Aimee Brown for my copy. This is my honest and unbiased opinion.

I have the cutest Giveaway for the tour - pictured here & opened worldwide.

Aimee Brown is a writer and an avid reader. Little Gray Dress is her first published novel. My second novel is in the works now. She’s currently studying for her Bachelor’s degree in English Writing. She spends much of her time writing, doing homework, raising three teenagers, binge watching shows on Netflix and obsessively cleaning and redecorating her house. She’s fluent in sarcasm and has been known to utter profanities like she’s competing for a medal. Aimee grew up in Oregon but is now a transplant living in cold Montana with her husband of twenty years, three teenage children, and far too many pets. She would love to hear your thoughts on Little Gray Dress! If you’d like to chat with her she’s very active on social media. You can find her at any of the networks below. Stop by and say hello! 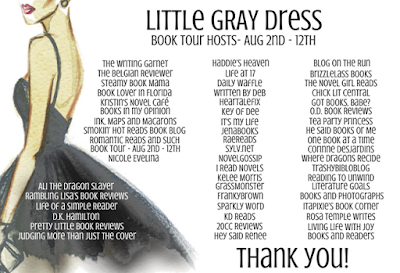