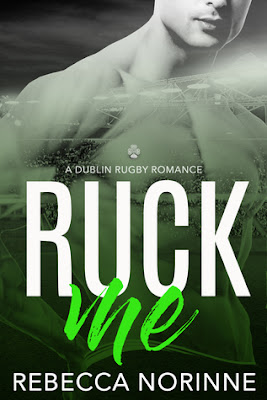 I’ve called Aoife O’Shaughnessy a number of things, but dumb was never one of them. Through all the insane things she’s done—all the trouble she’s gotten into—I never once thought she was actually stupid.

Because I just heard her plan to lose her virginity to the vilest human being I’ve ever met. My first thought? How the fuck is Aoife still a virgin? The second? Over my dead body.

So I volunteered for the job instead.

It might be the stupidest thing I’ve ever done, but once the words were out of my mouth I couldn’t take them back. Suddenly, I can’t stop wondering what it would be like to kiss the pink-haired sprite I’ve known my whole life, to hear her moan my name when she comes for the first time.

And now she’s wondering about me too.

What started off as a bit of fun has spiraled out of control and now I’m in deep. I never meant to fall in love with her … it wasn't supposed to go this far.

And what happened next? It could ruin us both.

I loved Aoife and Eoin's playful friendship especially at the beginning when it just bordered on flirting. It was great to see them have that friendship as a base but will they be anything more? Aoife is impulsive but kind making her character very easy to like. Eoin is cheeky, funny and the perfect match for Aoife and you could see how they were friends for so long.

Although it's safe to say they both have their flaws but this is mainly down to their age. They are both young and still trying to figure things out. This made them all the more real for me as they make mistakes but each trying to do the right thing in their own way. There are some great supporting characters who made me want to find out more about them. So I'm looking forward to seeing their stories play out in the rest of the series. It was also lovely to have a little catch up with Declan and Sophie from book one in the series.

Chemistry wise they were on fire and at times I'm surprised my Kindle didn't burst into flames. I'm always a fan of dual perspectives as you really get to explore their thoughts and feelings this way. This book is great at showing how both characters are feeling and you get an insight into how the various twists and turns of the story affects them. For me the story moved pretty quickly and it wasn't long before I was nearing the end it was pretty late but I had to continue reading to find out how it would all end.

This book has it's steamy and sizzling parts but it also has a very sweet romance that was fun to see develop. There are also some more serious themes that play out that added a bit of depth to the story too.

In Ruck Me there is just the right amount of love, emotion and passion to make the story come alive.

With thanks to Rebecca Norinne for my copy. This is my honest and unbiased opinion.

Rebecca has always loved writing stories. When she won a writing contest in the third grade (a 1000-word tale about her teddy bear, Max), she announced to the world that she wanted to be an author someday. Fast forward several years later, she graduated from the University of Pittsburgh with a degree in English with a focus on Journalism. She began her professional life writing radio commercials until the station she worked for installed a mad-libs style commercial generator and her job became obsolete. Moving home to California just after the dot-com crash, Rebecca embarked on a career in technology public relations in Silicon Valley, working for some of the country's most innovative start-ups and publicly-traded companies before transitioning into an in-house corporate communications role at a Fortune 500 company. After more than a decade of writing press releases, technical articles, and drafting executive speeches and PowerPoint presentations, in 2014 she retired to pursue creative writing full time. Rebecca lives as an expat in Dublin, Ireland, with her husband. When not writing, she is exploring her new city and traveling across Europe searching for inspiration for her next story.