Thank you for stopping by I have a little Q&A with Charlie Laidlaw today.

First of all let's take a look at his book The Things We Learn When We're Dead. I will be reviewing this book at the beginning of October as at the moment my TBR pile is way out of control! 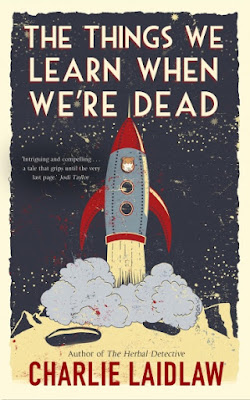 On the way home from a dinner party she didn't want to attend, Lorna Love steps into the path of an oncoming car. When she wakes up she is in what appears to be a hospital – but a hospital in which her nurse looks like a young Sean Connery, she is served wine for supper, and everyone avoids her questions.It soon transpires that she is in Heaven, or on HVN. Because HVN is a lost, dysfunctional spaceship, and God the aging hippy captain. She seems to be there by accident. Or does God have a higher purpose after all?At first Lorna can remember nothing. As her memories return – some good, some bad – she realises that she has decisions to make and that she needs to find a way home…

1 - Can you choose three words that best describe your personality?

2 - Is there a book you wish you could have written?

The Summer Book by Tove Jansson, and Mothering Sunday by Graham Swift.  Both, in different ways, are beautifully written.

4 - If you were stranded on a desert island what three books would you want with you?

Ideally, any book that would burn well.  However, I’d settle for anything that could teach me how to fish, grow stuff, or build an aeroplane.

5 - Do you have any strange writing habits?

I find that writing is the easy bit.  Deciding what to write is the hard bit.  Strangely, I find my best inspiration when driving or on a long train journey.

6 - Is there a specific place where you write?

I have a home-office, and that’s the only place I write.

7 - What is your favourite personality trait of your main character from The Things We Learn When We're Dead?

She’s a young women so, like many young people, she’s an idealist.  In a sense, the book is about how she comes to balance idealism with reality – something, I guess, that we all have to do.

8 - What did you enjoy most about writing The Things We Learn When We're Dead?

Getting to know my main character, finding out what she liked, and the things she didn’t like.  Although it doesn’t come into the book, I know what TV programmes she likes, the kind of music she enjoys, and the books she reads.  For me, my fictional characters become real people, and it’s them who (almost) tell me what to write.

9 - Are you working on anything now?

A book called Darker Matters which is about love, loss, and a dollop of astrophysics.  It’s a dark comedy about the unintended consequences of celebrity, and how a young woman grows up in the long shadow of her film star father.  It’s poignant and fun.

Paperback.  Do you know how little authors are paid for eBooks?

Contemporary.  I like to support living authors (see above).

With regret, cinema, because I love the theatre.

Coffee.  Tea is the work of the Devil.

Night out or Day out

Either.  It depends on the who and the where.

Thank you again for taking the time to answer the Q&A!

I was born in Paisley, central Scotland, which wasn’t my fault.  That week, Eddie Calvert with Norrie Paramor and his Orchestra were Top of the Pops, with Oh, Mein Papa, as sung by a young German woman remembering her once-famous clown father.  That gives a clue to my age, not my musical taste.

I was brought up in the west of Scotland (quite near Paisley, but thankfully not too close) and graduated from the University of Edinburgh.  I still have the scroll, but it’s in Latin, so it could say anything.

I then worked briefly as a street actor, baby photographer, puppeteer and restaurant dogsbody before becoming a journalist.  I started in Glasgow and ended up in London, covering news, features and politics.  I interviewed motorbike ace Barry Sheene, Noel Edmonds threatened me with legal action and, because of a bureaucratic muddle, I was ordered out of Greece.

I then took a year to travel round the world, visiting 19 countries.  Highlights included being threatened by a man with a gun in Dubai, being given an armed bodyguard by the PLO in Beirut (not the same person with a gun), and visiting Robert Louis Stevenson’s grave in Samoa.  What I did for the rest of the year I can’t quite remember.

Surprisingly, I was approached by a government agency to work in intelligence, which just shows how shoddy government recruitment was back then.  However, it turned out to be very boring and I don’t like vodka martini.

Craving excitement and adventure, I ended up as a PR consultant, which is the fate of all journalists who haven’t won a Pulitzer Prize, and I’ve still to listen to Oh, Mein Papa.

I am married with two grown-up children and live in East Lothian.   And that’s about it.