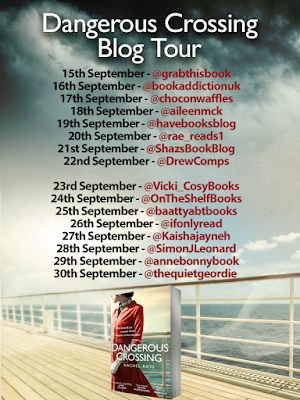 It's my pleasure to be taking part in the blog tour for Dangerous Crossing by Rachel Rhys. Today I will be sharing my review but first of all let's take a look at the description for the book... 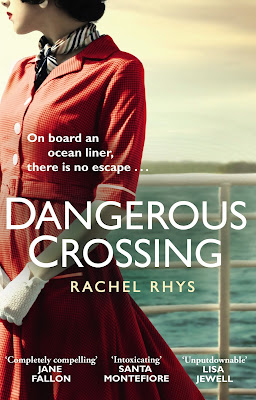 England, September 1939
Lily Shepherd boards a cruise liner for a new life in Australia and is plunged into a world of cocktails, jazz and glamorous friends. But as the sun beats down, poisonous secrets begin to surface. Suddenly Lily finds herself trapped with nowhere to go ...
Australia, six-weeks later
The world is at war, the cruise liner docks, and a beautiful young woman is escorted onto dry land in handcuffs.
What has she done?

I have to say that as soon as I read the description for Dangerous Crossing I couldn't wait to start reading. With this being an historical mystery it really is the perfect book for me as I have taken such a liking to this genre. With me looking forward to picking this book up I was slightly worried that I would have put too high an expectation on it. However I decided to keep an open mind and just sit back, relax and take notice of every detail contained within this story. This is expertly done by the author as shown by the wonderfully descriptive first chapter. I felt as if I was instantly transported to Sydney along with a huge amount of curiosity over what actually occurred on the voyage from England to Australia. This curiosity was kept throughout as I got to know the characters better along with their differing personalities. There is a slight sense of claustrophobia within the story, now I don't mean in a horror or thriller movie sense but the subtle underlying tension of being isolated at sea. Even with all the passengers it can be easy to feel alone amongst all the crowds. As the reader we know that something bad will happen so there is that slight thread of tension as everyone goes about their daily life on board.

The descriptive writing continues throughout and really paints quite a vivid picture of that era from the clothes right through to the people who are setting off for a chance at a better life or just for the adventure. There is also the threat of war hanging over the passengers that also adds an extra depth. I loved the beautiful descriptions of all the ports and the excursions that the characters go on. They lessen the sense of isolation on board at least for a while anyway.

The characters in this book are intricately written and at times I was almost left feeling paranoid over if they had any hidden agendas. It felt as if there were secrets around every corner. I kept asking myself could I take anyone at face value, this alone helped to ramp up the tension. Lily is very intriguing and I loved the hints to her past as it raised questions that I couldn't wait to discover. With Lily there is a slight innocence to her personality so I guess it is natural for her to be drawn to the more outgoing passengers. All of the characters come together to create a more rounded and appealing story. From the more likeable ones to the enigmatic and flawed characters.

There is a mystery contained within the story but it is also a drama about people and the secrets that they may keep. Every time I had to put Dangerous Crossing down my mind automatically kept thinking of the story and where it would go next. That to me is a sign of a truly engaging and immersive story the one you just can't seem to let go. Along with a steady pace all the way through that managed to draw me into both the characters and the story. This isn't a tension filled story throughout but I don't think that it needed to be it had a wonderful concentration on the characters that kept me intrigued.

With thanks to Anne Cater and Transworld Books for my copy. This is my honest and unbiased opinion. 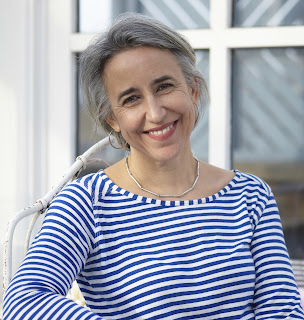 I was born in Ibadan, Nigeria where my anthropologist father happened to be doing fieldwork at the time. Sabbatical years in far-flung places were a feature of my childhood and I attended school in both Sierra Leone and California. Otherwise, I mostly grew up in the suburbs of London where my adolescence was spent either in the local library or waiting for the last tube home.

After taking an American Studies degree at Manchester University I taught English in Madrid. While working as a secretary back in London, I started writing features and hand-delivering them to the magazine publishing house around the corner. The day the first one got accepted, I packed in my job and declared myself a freelance journalist, which is basically what I remained for the next twenty years, writing features for national magazines and newspapers, such as Marie Claire, The Times and The Telegraph, and then moving on to non fiction books. My dream was always to write fiction but it wasn’t until I was forty-seven that I finally conquered the self doubt and my first novel, The Mistress’s Revenge was published.
These days I live in North London with my partner and three (nearly) grown children and one very badly behaved dog. Together with my family I spent four happy years living in Spain from 2004 to 2008 and I live in fear of people finding this out and asking me something in Spanish at which I remain shamefully inept.
My first novel, The Mistress’s Revenge, was followed by three more contemporary fiction titles under the name Tamar Cohen – The War of the Wives, Someone Else’s Wedding and The Broken.
In November 2014, my first crime novel, Dying For Christmas was published under the name Tammy Cohen, followed by First One Missing a year later, and When She Was Bad in April 2016. My latest, They All Fall Down is published in July 2017.
Writing as Rachel Rhys, Dangerous Crossing, my first foray into historical mystery was published in March 2017.
I am a member of the Killer Women collective of London-based female UK crime writers.