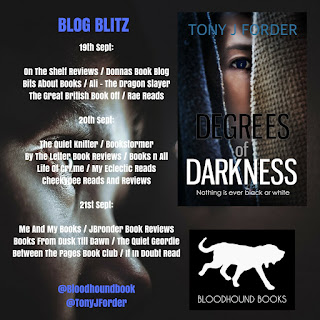 Thank you for joining me today I will be sharing my review of Degrees of Darkness by Tony J Forder as part of the fab blog blitz. 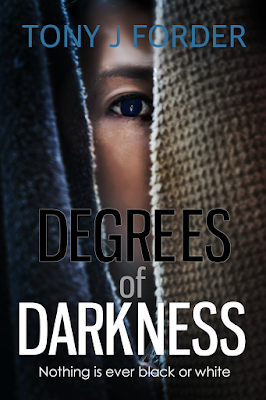 Pre-teen girls are being abducted from their homes and their families murdered. When Frank Rogers, once a DI with the Met and now running his own debt collection agency, is told that his own daughter is missing, his son murdered, he naturally wants to become involved with the case.

Soon Frank’s face is all over the news. In an unexpected turn of events, the killer contacts the police and says he is willing to talk, but only to Frank.

When the body of the first abducted girl is discovered, Frank realises it is a race against time to save his daughter.

In order to solve the case, Frank must work out how the killer is picking his victims.

But how do you catch a murderer who is hiding in plain sight? And can Frank solve the mystery, when he has so much to lose?
Buy Link

The opening to this story definitely sets a terrifying scene and I have to admit to double checking the locks before I went to sleep. It's a horrific situation that becomes a living nightmare for Frank and Laura. There are plenty of edge of your seat moments that made me gasp in shock but also made me want to keep on reading without stopping. Although I have to admit there were some occasions where I wanted to read through my fingers.

Frank's character is very intriguing, he has a determination that made me sit up and take notice of his character. You could feel his pain but also the fight to make sure his daughter survives and to catch the murderer. He is a flawed character but some of the best ones are.

With suspense and tension at high levels throughout I couldn't wait to find out how it would all end. There are uncomfortable moments so if you are a bit squeamish you may want to prepare yourselves. It all adds to the terrifyingly shocking crimes and it makes for a compelling read. When the story is shown from Laura's perspective you can really get a sense of the situation she is in and also her strong survival instinct. From Tony J Forder's descriptions it really puts the reader right in that environment with Laura's character as if you are experiencing it with her. As all of the scenes play out within the story I felt this nervous energy as I waited for the inevitable snap of tension. I was willing Frank to find her before time ran out!

Tense with some shocking moments! 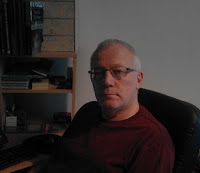 On 1st February 2017, Tony signed to Bloodhound Books, who published his edgy crime thriller Bad to the Bone in spring. It is the first in a series.

Tony has been writing stories since childhood, but it was only when he won a short story competition judged by an editor from Pan Books, that he realised he might actually be half decent at this writing business.

The story, Gino's Bar and Grille, went on to be published in Dark Voices 2, part of the celebrated Pan Book of Horror series. Three further short story sales followed: Book End, published in DarkVoices 4, Character Role, in FEAR magazine, and finally A Grim Story, which featured in A Rattler's Tale.

During a book singing for Dark Voices 2, Tony was seated next to author Brian Lumley. At one point, Tony revealed to Brian that he felt out of place alongside all the proper writers. Brian then told Tony something he has never forgotten: "The moment you sat down and pulled a story out of your imagination and put it to paper, you became a proper writer."

Subsequently, Tony began to focus on novel writing. He admits that his initial attempts were exploratory and somewhat derivative, although there was some interest from an agent – who oddly enough turned out to be Brian Lumley's wife, Dorothy.

Tony wrote Degrees of Darkness, which he was happy with. He wasn't so happy with a follow-up, so that never saw the light of day.

As a part-time writer with a full-time job, plus some ill-health, life got in the way and, although Tony continued writing, it took a back seat to making a living.

This year, however, Tony has been inspired by new ideas, and has been working hard on two new books, both of which should be completed in 2017.