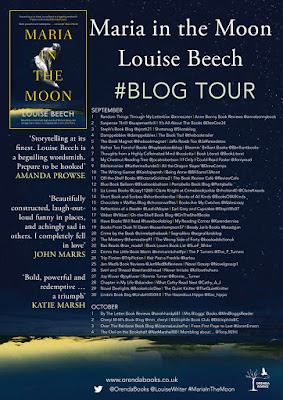 It's my pleasure to be one of the stops on the blog tour for Maria in the Moon by Louise Beech. Today I'm delighted to be sharing my review but first of all let's take a look at the description for the book.. 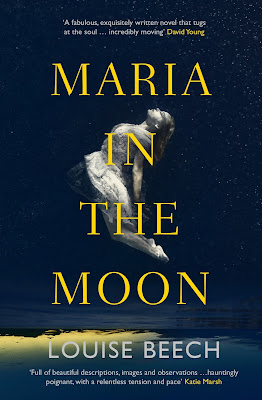 Long ago my beloved Nanny Eve chose my name. Then one day she stopped calling me it. I try now to remember why, but I just can't.'

Thirty-one-year-old Catherine Hope has a great memory. But she can't remember everything. She can't remember her ninth year. She can't remember when her insomnia started. And she can't remember why everyone stopped calling her Catherine-Maria. With a promiscuous past, and licking her wounds after a painful breakup, Catherine wonders why she resists anything approaching real love. But when she loses her home to the deluge of 2007 and volunteers at Flood Crisis, a devastating memory emerges ... and changes everything. Dark, poignant and deeply moving, Maria in the Moon is an examination of the nature of memory and truth, and the defences we build to protect ourselves, when we can no longer hide...

I had heard so many good things about Maria in the Moon so I was eager to start reading and find out for myself. It's going to be hard to put into words how emotional and heartfelt this story is without constantly repeating myself but I will try. I have to admit to being a pretty emotional person, I do after all cry at happy events aswell as sad. However I think most readers will find an emotional attachment to this story that will leave them thinking about the story long after finishing. Well this is true in my case anyway.

Catherine is such an intriguing character and to begin with I didn't quite know what to make of her. She has a down to earth and straight talking personality but also a vulnerability that was such a contrast too. Within the story there is humour which Catherine uses to deflect that made me smile. The way her character has been written is something I can only describe as refreshingly honest she has flaws but this is what made her character so engaging for me. After all don't we all have sides to our personality that may not be to everyone's taste.

Maria in the Moon is a wonderfully descriptive story that well and truly puts the reader into Catherine's life. I was willing her memories back but also dreading the inevitable fallout from the recovery of them. This is the first book that I have read by Louise Beech but it certainly won't be the last. Louise Beech has the ability to write in such a way that the reader feels a part of the story and fully engaged in the characters lives. Catherine especially feels real and flawed and these are often the characters we can relate the most to. The whole pacing of the story is steady and consistent all the way through.

I found myself reading some scenes with tears in my eyes and there is a heartbreaking rawness to Catherine that I couldn't help but become emotionally attached to her. There are some pretty heart wrenching scenes that were tough to read at times. However there is also the hope for survival and to have the chance to start again.

With thanks to Anne Cater and Orenda Books for my copy. This is my honest and unbiased opinion. 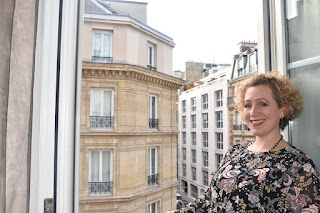 Louise has always been haunted by the sea, even before she knew the full story of her grandfather, the man who in part inspired novel How to be Brave. She lives with her husband and children on the outskirts of Hull – the UK’s 2017 City of Culture – where from her bedroom window she can almost see the waters of the River Humber, an estuary that inspired book, The Mountain in my Shoe.

She remembers sitting as a child in her father’s cross-legged lap while he tried to show her his guitar’s chords. He’s a musician. Her small fingers stumbled and gave up. She was three. His music sheets fascinated her – such strange language that translated into music.
Her mother teaches languages, French and English, so her fluency with words fired Louise’s interest. She knew from being small that she wanted to write, to create, to make magic. She’s inspired by life, history, survival and love, and always has a story in her head.
She loves all forms of writing. Her short stories have won the Glass Woman Prize, the Eric Hoffer Award for Prose, and the Aesthetica Creative Works competition, as well as shortlisting twice for the Bridport Prize and being published in a variety of UK magazines. Her first play, Afloat, was performed at Hull Truck Theatre in 2012. She also wrote a ten-year newspaper column for the Hull Daily Mail about being a parent, garnering love/hate criticism, and a one year column called Wholly Matrimony about modern marriage.
Her debut novel, How to be Brave, was released in 2015 and got to No 4 in the Amazon UK Kindle chart, and was a Guardian Readers’ pick for 2015. This novel came from truth – when Louise’s daughter got Type 1 Diabetes she helped her cope by sharing her grandad’s real life sea survival story.
Her second novel, The Mountain in my Shoe, was released in 2016 and was inspired by her time with children in care. It explores what family truly means, and how far we will go for those we love. It longlisted for the Guardian Not The Booker Prize.
Maria in the Moon will be released in 2017.
Author Links