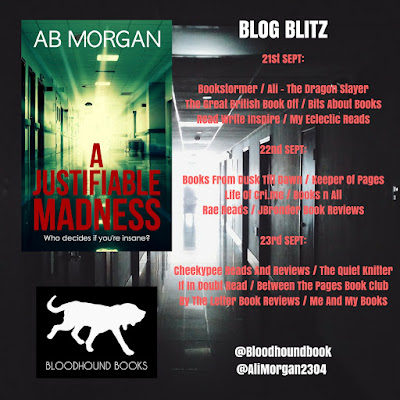 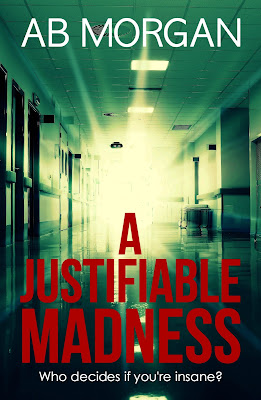 Can you really tell the difference between madness and sanity?

Mark Randall goes to great lengths to get himself admitted to an acute psychiatric ward and, despite being mute, convinces professionals that he is psychotic. But who is he and why is he so keen to spend time in a psychiatric hospital?

When Mark is admitted, silent and naked, the staff are suspicious about his motives.

Dealing with this, as well as the patients on the ward, Mark’s troubles really begin once he is Sectioned under the Mental Health Act. When decisions about his future are handed to Consultant Psychiatrist, Dr Giles Sharman, Mark’s life is about to go from bad to worse.

Drugged, abused and in danger, Mark looks for a way out of this nightmare. But he’s about to learn, proving that you are sane might not be easy as it seems...

The description for A Justifiable Madness well and truly captured my attention, I had so many questions going into the story. With obviously the main one being - Why would anyone try to get themselves admitted into a psychiatric hospital? I have to admit to being completely curious as to where the story was going to go. To be honest it felt quite refreshing to not really have any clues as to the storyline to begin with. It meant that I could just completely wrap myself in the story from meeting Mark and his antics then being arrested and admitted to the hospital.

I enjoyed reading the story from the different perspectives, with Monica you can see she is trying to do her job and also how she can't quite figure Mark out. The conversations between Monica and Emma are lively and they added a lightness to their environment and working life. Then you have Mark and I loved his inner dialogue as he begins his time on the ward mute so you get to hear his true thoughts. He is a determined character that I couldn't help but like.

Then we are introduced to Dr Sharman and that is when events really unravel I would hate to ruin the story so no spoilers from me. I found the story subtle as in that there was tension but it was more underlying and not full on. I actually liked this pace it fit in really well with the storyline even though it isn't a highly tension filled story the pacing was brilliant and in no time at all I had reached the end. I enjoyed the clever plot and it definitely made me think about the whole subject of psychiatry from diagnosis through to the treatment. A Justifiable Madness is part thriller, drama and suspense all rolled into one making a fantastic combination.

An intriguing and different story! 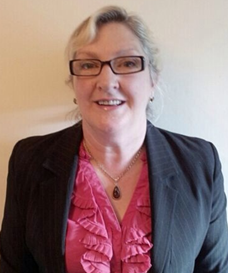 Married to an overgrown child with a beard and too many motorbikes, Alison Morgan lives in a corner of a field in North Bedfordshire and is making the most of a mid-life crisis. The Morgans are determined not to grow old gracefully or to be seen wearing beige and can be found exploring life through a love of live music, anything with an engine, the sea, mountains, rugby, proper pubs and fascinating people.

Alison has worked for the NHS for nearly thirty years, twenty of those within mental health services, at the front line, where she eventually became the manager of a countywide community service for people experiencing their first episode of psychosis. Much to her frustration, her heart decided to develop an electrical fault, which forced her to sit down for more than five minutes, and her career temporarily juddered to a halt. Not one for thumb twiddling, she took up position in front of a computer with a plan to write a set of clinical guidelines for assessment of psychosis, but instead a story, which had been lurking in her mind for several years, came tumbling out.

With her health steadily improving thanks to the staff at Papworth Hospital, Alison hopes to return to nursing part-time, but is determined to keep writing fiction. Her debut novel AJustifiable Madness is inspired by her life and career as a psychiatric nurse, and her fascination with the extremes of human behaviour. Her second novel, Divine Poison, also published by Bloodhound books is due for release in January 2018.