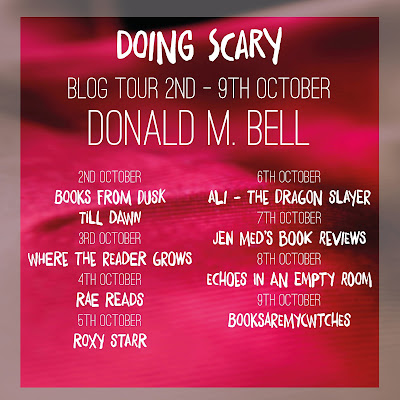 Thank you for joining me today for my stop on the blog tour for Doing Scary by Donald M. Bell. I will be sharing my review but first of all let's take a look at the description for the book... 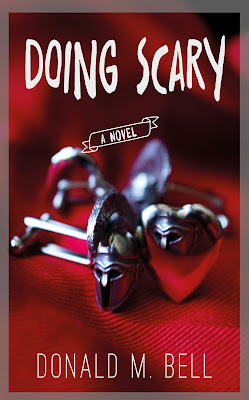 Two marriages haunted by betrayal. Four people whose pursuit of the American Dream has taken a nightmarish turn.
Roman and Sage Bryant-Cole have spent nine months trying to salvage what was left of their marriage after it was rocked by the revelation of Roman’s serial affairs. Sage is dealt a second blow when she discovers that her cherished cousin, Owen Bryant, has been cheated on by his ruthless, gold-digging wife, Leah.
Sage’s discovery hits the reset button on the progress she and Roman had been making on their marriage, as all the doubts and fears she has tried to suppress come flooding back. In order to reclaim Sage’s trust, and to save a love now left dangling by a thread, Roman must take his efforts to win back his wife to another level.
Leah and Owen Bryant are visited by a ghost from their past; Leah’s college sweetheart, Casey. Leah and Owen must confront a dark secret at the heart of their marriage, if they are to stand a chance of surviving as a couple.
One family’s legacy, two marriages, four lives, and millions of dollars are at stake.
Doing Scary is a coming of age story which explores the transition from adolescence to adulthood and the battles we face in our thirties to keep our spiritual, emotional and psychological progress in check, as the things we hold most dear are put to the test.

The description for Doing Scary definitely intrigued me and to be honest at first glance I wasn't quite sure which way the story was going to go. However within a couple of pages I have to say I found myself easily pulled into the lives of Roman, Sage, Owen and Leah. The story unfolds easily and clearly with the reader discovering early on that there had been affairs committed by Roman. Which leaves his wife Sage trying to rebuild her trust in him and also their marriage. Then you have Owen who suspects his wife Leah of having an affair. It's quite a tangled web but Donald M. Bell has written it in a way that you can't help but become immersed in the story and the characters situations.

I really enjoyed the fact that you get to experience the story from the different points of view. It gave the story a more rounded and developed feeling as you get to see everything from all sides. Along with each others thoughts and feelings regarding the other characaters.

This story is about relationships, family and how life may not necessarily turn out the way you plan. That maybe you have to adapt to the changes and move forward the best you can. This story definitely left me thinking about the different relationship dynamics that people have. An interesting and engaging story!

With thanks to Authoright & Rachel Gilbey for my copy and invite to join the tour. This is my honest and unbiased opinion.

Donald M. Bell Sr. is the Senior Pastor/Teacher of Covenant Blessing Fellowship (CBF) launched out of an adult bible study 2001. Pastor Bell has been preaching since he was sixteen and holds a professional degree in Organizational Psych. Behavior. Bell’s profound ability to communicate spiritual principles in secular settings has been featured on The Oprah Winfrey Show, ABC 20/20, and the documentaries Sister I’m Sorry, and Soul Mate. He was also a weekly guest on KJLH nationally syndicated radio program Love in the Spirit hosted by Kevin Nash. Bell lives in a suburb of Los Angeles with his lovely wife, Michelle, who wedded in 1994 and is the father of three.