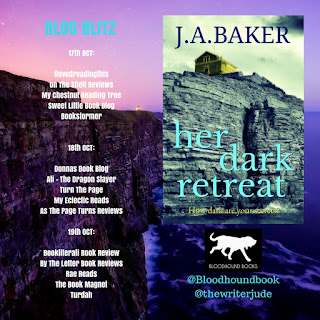 I'm delighted to be sharing my review today on the blog blitz for Her Dark Retreat by J.A. Baker. First of all let's take a look at the description for the book... 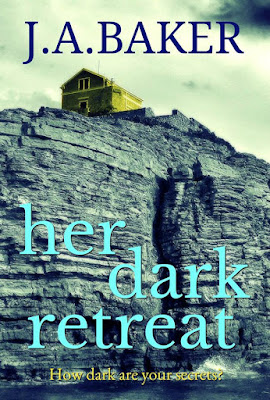 The coastguard’s residence Chamber Cottage, which sits high up on the North Yorkshire cliffs overlooking The North Sea, holds many dark secrets.

Alec and Peggy are struggling to overcome their marital problems. Both damaged by problems from their childhoods, they are trying to get on with their lives. But this is hard for them to do when they both believe they are being watched. As a result, Peggy, who has terrible scars on her face, becomes more agoraphobic.

To make matters worse, Peggy discovers her estranged mother is stalking both she and Alec, claiming she has a dark secret that is putting Peggy in danger.

What caused the scars on Peggy’s face? Is Alex really the monster Peggy’s mother believes him to be? And what secrets does Chamber Cottage hold?

If the description for the book didn't catch my attention that then eerie cover definitely did. I couldn't wait to start reading and see where this story would take me. Well what can I say about that opening I think I had to take a deep breath before carrying on with the next chapter. One word I could use to describe it is definitely tense, very dark and tense I almost felt as if I was right there with the character. It was certainly one way of grabbing my attention!

With plenty of secrets to keep the story moving as well as keeping my attention all the way through. The story is balanced out by being told from different perspectives and I thought this kept the story fresh along with keeping the reader guessing. The story will leave you on edge on quite a few occasions as the book delves into Peggy and Alec's life. I'm trying to be pretty vague about the plot as it is really worth discovering everything for yourself.

Each character has flaws that will make you wonder about their intentions and wondering about their actions. This is a sign of well written characters the ones you feel drawn to even if you are not sure about their true nature.

The descriptions of Peggy and Alec's home had me feeling isolated too with that creeping sense of danger lurking around the corner. J.A. Baker has written a story that leaves you feeling as if you have been through everything with the characters. Creating the vivid descriptions along with the dark suspenseful moments right through to the mystery being revealed.

An addictive story that will play on your darkest fears!

Born in Middlesbrough too many years ago to mention, J. A. Baker developed a deep appreciation of literature and reading from a young age after being introduced to it by her parents. Weekly visits to the library were the norm and after being handed a collection of Edgar Allen Poe stories by her father, her love for the darker side of fiction slowly grew. She is an avid reader of all books but is drawn in particular, to psychological thrillers.

After many rejections (too many to mention!) her debut novel, Undercurrent, was published by Bloodhound Books in March 2017 and made it into the top 100 Amazon chart in both the UK and Canada. She is currently putting the finishing touches to her third novel and working on her fourth one.

J. A. Baker has four grown up children and lives in a village on the outskirts of Darlington with her husband Richard, and Theo, their barking mad dog.