I'm so happy to be joining the blog tour for Warwick's Mermaid by Ellie Gray and today I will be sharing my review. First of all though let's take a look at the description for the book, then read on for an extract and don't forget to enter the giveaway to win an ecopy of the book! 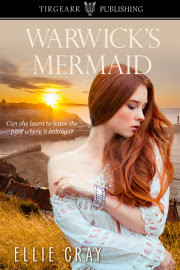 Genre:   Contemporary Romance
Release Date:   11 October 2017
Publisher: Tirgearr Publishing
Having escaped an abusive relationship, Chloe MacGregor is determined to put the past behind her. The little cottage high up on the cliffs overlooking the beautiful North Yorkshire town of Whitby is her safe haven, somewhere she is free to be herself.

When the arrival of her new neighbour and boss, Luke Warwick, threatens her peaceful, sheltered life, Chloe is forced to confront her past and to re-evaluate who she really is. Falling in love with Luke is not part of her plan but, to her surprise, Luke is falling for her too. The only thing preventing their happy ever after is Chloe herself. Will she ever truly learn to leave the past where it belongs?
BUY LINKS

EXTRACT
Chloe stared at the bright blue front door, not quite sure if she was willing it to open or remain shut. Cerulean Bliss. She had been drawn to the name, conjuring up images of crystal clear Mediterranean Sea, sandy beaches, and cloudless skies. Chris had appeared amused by her decision to choose the paint based on the name rather than the colour.
‘‘Babe, if you want Cerulean Bliss for the front door, Cerulean Bliss is what we’ll go for.’’
But when he’d returned from a boys’ weekend away to find Chloe had painted the door, it had been a different story. He had flown into a rage, claiming she hadn’t consulted with him on the colour and had gone behind his back, waiting until he was away to make changes to his house. That was the first time she had been on the receiving end of his anger; the first time she had been frightened and confused by his apparent about-turn on something he had previously agreed to. It hadn’t been the last time.
Chloe glanced at her watch, frowning when it showed only a minute had passed since she had last looked. The frown deepened when she lifted a hand to rub her eyebrow and saw how much her fingers were trembling. A gentle hand touched her forearm and she looked up to meet her friend’s calm gaze.
‘Don’t worry. It’s going to be fine.’
Chloe shook her head, unable to prevent her gaze from returning to the front door only twenty or so metres from where they were sitting in her car. What if he glanced around and saw her? What if he didn’t?
‘What am I doing, Bekah?’ She dropped her head in her hands, squeezing her eyes shut and immediately wincing as that small movement resulted in more pain than it should.
‘The right thing, that’s what.’ Rebekah rubbed her friend’s forearm. ‘Come on, Chloe. We talked about this.’
‘I know, I know we did.’ Chloe lifted her chin, but didn’t remove her gaze from the door. ‘I just…I keep thinking about it, over and over. He’s not always that bad, not really, and I think…I think maybe it was my fault.’
Chloe didn’t have to see her friend’s face to know she was angry; she could feel it radiating from her in waves. Rebekah remained silent and reached across to pull down the sun visor in front of Chloe, lifting up the small flap covering the vanity mirror.
‘There is nothing you could have done that would ever justify what he did to you. Nothing.’
Chloe stared at her reflection, taking in the dark purple bruise circling her left eye—now bloodshot and half-closed—the ugly graze reaching across her cheekbone and further down to the swollen and split bottom lip. Without thinking, she licked her lip. The tip of her tongue slipped over the injury, and she drew in a sharp breath at the sting it produced.
She met her gaze in the mirror once more, noting the confusion and uncertainty dulling their green hue. ‘I know. But it’s not usually this bad. He pushes me around a bit sometimes, nothing major, and he says things…you know, usually when he’s had a drink.’
‘That doesn’t make it right. You know that.’ Rebekah blew out a long breath. ‘I can’t believe you never told me.’
Chloe avoided her friend’s accusing gaze. What could she have told her? That Chris was proving her mother right? That she wasn’t woman enough for any man?
‘It doesn’t matter now anyway. I—’ She drew in a strangled breath as the front door opened and, shrinking down a little in her seat, Chloe prayed he wouldn’t glance down the street and recognise her car among all the others parked along the kerb.
As she watched, Chris locked the door before turning and sauntering along the path, tossing his keys in the air and catching them, his lips pursed as he whistled. Chloe couldn’t hear from this distance, but she knew he would be whistling the tune to whichever song had been on the radio before he left the house. She glanced at her watch once more; 8.15am on the dot. Chris was a creature of habit.
‘Bastard.’ Rebekah thumped the dashboard in obvious frustration as he got into his car without glancing left or right before driving off. ‘Look at him, acting as if he hasn’t a care in the world. You should have let Sean come round last night and hammer ten bells out of him, see how he liked it.’
Chloe gave a weak smile. ‘I don’t suppose that would have solved anything.’
They sat in silence for a few minutes before Rebekah finally opened her door.
‘So, come on then. Let’s do it.’
Chloe bit her lip and immediately winced in pain, wishing she hadn’t. Gingerly exploring her lip with her fingers, she saw they were stained with blood, and stifling a sigh, searched in her bag for a tissue.
‘What if he comes back? What if he’s forgotten something?’
‘He’s not coming back. He’s gone to work,’ said Rebekah, nodding her encouragement. ‘Come on, the sooner we get in, the sooner we get out. We’ll only be a few minutes.’

My heart broke for Chloe in the opening to this book and I was also so angry that she had endured such a terrible time. So I really hoped that she would find a bit of peace as she started her new life. Chloe has suffered with her confidence so there is a vulnerability to her that was so sad to see especially how damaged her confidence is. Luke is surprised to feel a connection with Chloe and their first meeting made me like him even more as he pretty much became her knight in shining armour. Even if she really didn't want him to be! I really enjoyed hearing the story from both Chloe and Luke's perspective it was lovely to see their connection play out. There were some characters who I fell for namely Luke but also characters who I really hated namely Chris!


The setting for the story was perfect and Ellie Gray had a lovely descriptive way of describing everything so it felt as if I was right there. The pace of the story is steady and gives you time to get to know the characters. So even though it's a short book I never once thought that the story was being rushed along. I couldn't help but root for Chloe and Luke, but will there be a happy ending for them?

It's the kind of story where I just wanted to curl up with a hot chocolate and become immersed in the story so that is exactly what I did. With this being a short story it is perfect to sit and read in one go.

With drama, love and new beginnings Warwick's Mermaid was a joy to read! 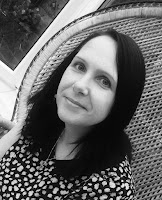 Ellie Gray is a contemporary romance author who loves to write heart-warming, sensual romances with characters her readers can really identify with. Her novels are set in places inspired by her own life and travels, including the beautiful UK Yorkshire countryside as well as far flung, exotic countries such as Egypt.

Currently working on her fourth novel, and still tinkering away at a young adult novel first started some years ago, Ellie loves to hear from her readers. You can contact her through any of the social media links below or through her website.