Thank you for joining me I have a fabulous Publication Day post for My Girlfriend's Perfect Ex-Boyfriend by Peter Jones. Today I'm sharing a character profile from the book. If you get chance check out the other blogs taking part as there is a different character profile on each blog. 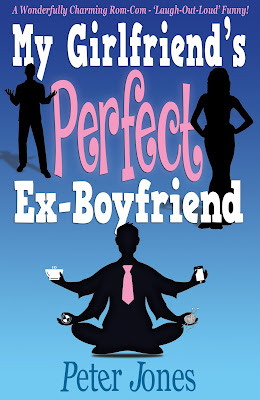 Adrian Turner, Mountaineer, Secret Agent, Fireman… Ade would dearly like to be any of these things, though he’d trade them all to win the heart of feisty Public Relations Executive, Paige.
Instead, he’s a disillusioned school teacher, on suspension, after an unfortunate incident with a heavy piece of computer equipment. And somebody’s foot. And Paige? Despite being his girlfriend for the past eighteen months, she still seems to have one foot out of the door and hasn’t quite committed to leaving a toothbrush in the bathroom.
​
Of course, it doesn’t help that she’s working with her ex-boyfriend, Sebastian. A man who in almost every way imaginable is better, taller, wealthier, hairier, and infinitely more successful than Ade.
​
Is Paige still in love with Sebastian? Why then did she suggest they get away for a few days? Some place romantic…
​
But when Adrian finds himself in Slovenia - with Sebastian in the room down the hall - he realises there’s serious possibility that he’s in danger of losing his job, his mind, and the woman he loves…
​
From best-selling author Peter Jones comes this hilarious romp about love, and the things people do to keep it from getting away.

Genie – isn’t quite what I was expecting.
She’s nice, though. And every bit ‘the girl in the office’ – which is quite a feat as once you’ve got past the nose and the mouth and the eyes and the hair, she’s clearly a woman in her early fifties, although she seems completely oblivious of the fact. Instead she kind of bobs around when she talks, which is a lot, and always at a hundred miles an hour, pausing only to laugh and giggle at anything that might be considered in any way amusing. And as she does so, her tinkly Yorkshire accent sort of wriggles its way inside your ears and tickles your ear drums, and after a while you become dimly aware that you haven’t actually been listening to a single word she’s saying – but you’re smiling nonetheless. And all this derived from a ten minute chat in the departure lounge.

Character Name: GENIE  GRIMSHAW-HIGGLESBOTTOM
Age (in the story) / Date of Birth:  Fifty (3rd November 1964)
Nationality: English
Who are they?: Paige’s work colleague and excited bride to be…
Who could play them in a movie adaptation?: Jane Horrocks

Peter Jones started professional life as a particularly rubbish graphic designer, followed by a stint as a mediocre petrol pump attendant. After that he got embroiled in the murky world of credit card banking. Fun times.
​
Nowadays, Peter spends his days writing, or talking about writing. He’s written three novels; a Rom-Com (Romantic Comedy), A Crim-Com (Crime Comedy), and a Rom-Com-Ding-Dong (a sort-of Romantic-ish Comedy, with attitude). He’s currently working on his fourth novel, which - if it’s a musical - he’ll no doubt describe as a Rom-Com-Sing-Song. (Spoiler: It isn’t).
​
He is also the author of three and a half popular self-help books on the subjects of happiness, staying slim and dating. If you’re overweight, lonely, or unhappy – he’s your guy.
​
Peter doesn’t own a large departmental store and probably isn’t the same guy you’ve seen on the TV show Dragons’ Den.
​
Follow Peter Jones