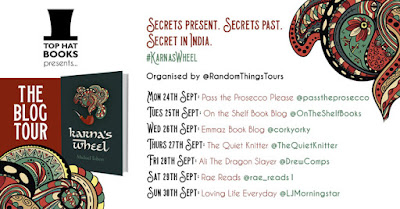 Thank you for stopping by I'm delighted to be taking part in the blog tour for Karna's Wheel by Michael Tobert and sharing an extract today. First of all though let's take a look at the description for the book... 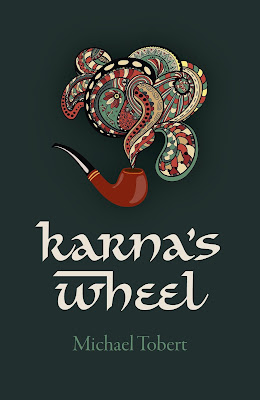 Secrets present. Secrets past. Secrets in India, where Stephen’s grandfather is a lowly functionary in the engine room of the Raj. Secrets at home, held tightly by Stephen’s half-Indian, half-Scottish mother. Only by uncovering what has been hidden can Stephen win Julia, a woman with secrets of her own...

Set in St Andrews, Scotland before the millennium; among the early-Twentieth century jute mills of Dundee; in the industrial underbelly of colonial Calcutta and on the epic plains of ancient India, Karna’s Wheel is a poignant story about love, inheritance, and the things which make us what we are.

21
Howrah station, midmorning, a buzzing behind a blurred image, like a stir of bees. In the blur of the hive, there is movement as of bodies crawling over bodies. Slowly the buzz, the blur and the bodies come into focus. We hear voices shouting, crying, arguing, and we see people swarming over a platform. A day night train from up-country—one of many—has just pulled in. It exhales after its journey (a pungent white-grey steamy purr of a breath) and continues to breathe out bodies.
From their dress, we realize that the passengers are poor. They look about in bewilderment as if this is the first time they have seen such things as they see now. Two people catch our interest: a mister and missus from up-country, Sunil Kanaujia and his wife, Parvati. They are villagers like the others, good with buffalo and at making dung cakes; yet there is something about this couple that singles them out.
The husband is young, dignified and tired. Around his wrist he wears the sacred thread, the sign that his forbears, before they were tillers of the land, were Brahmin. We notice how he carries himself: clearly a man not accustomed to taking care where his shadow falls. Yet, it is to his wife, half in shot, that the eye is drawn.
Parvati is busying herself gathering up her belongings on the station platform. As she straightens, we see she is a girl on the cusp between childhood and womanhood, about to step over. Her face is fresh, still soft from the world of family, fields, crops, trees, air, river and rocks that she has left behind. Her body is lithe, almost feline, as it is for young women who have just become aware of the power that has magically descended, the power to attract. We see her pleasure in this, as well as her uncertainty. As she moves, she holds a hand in front of her breast to protect it from men’s eyes. She keeps her head lowered and attends only to the commands of her husband.
Sunil looks around at the countless heads on the station platform rippling like the sea, a current of humanity propelled by its own unknowable purposes. He hears the clank of pistons, feels the iron and steel and concrete around him and is gripped by despair.
Sunil and Parvati push through the crowd. He has a roll of bedding balanced on his head. In each hand, he carries a box tied with string from which pots descend. He steps over bodies. Parvati follows. He asks directions of a stranger. Hands point, heads shake.
Three hours later, a durwan, the keeper of the mill gate, is looking out from behind the smoke of a strangled bidi and scratching his arse.

MICHAEL TOBERT went to Oxford University, started a publishing company of sorts and lives in Scotland where he and his wife have built a Montessori nursery school at the bottom of their garden. She, and others, nurture the children while he scythes the nettles and whispers encouragement to the wild flowers.

For more, please go to http://www.michaeltobertbooks.com/