The Man in the Wall by Emma Angstrom #Review #BlogTour @bloodhoundbook

I received an ARC from the publisher 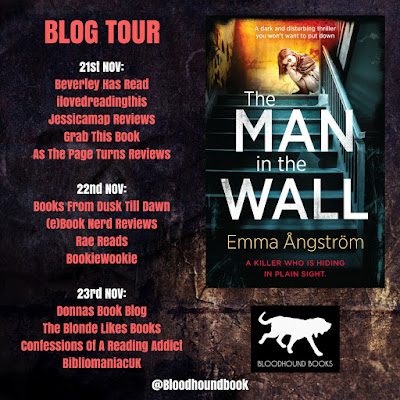 I'm delighted to be one of the stops on the blog tour for The Man in the Wall by Emma Angstrom. Today I will be sharing my review for this dark and thrilling story. First of all let's take a look at the description for the book... 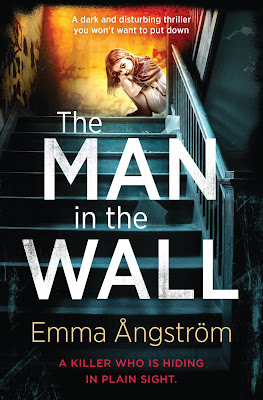 Alva is a sad and lonely child. With her father locked up in prison, she moves with her mother and two older sisters to an apartment building in town. She does not like her new home. Her room is small and her sisters continue to exclude Alva from their games.

Soon a bizarre murder takes place in the building. A husband discovers his wife dead in the hall of their apartment, two week after she disappeared from their home.

Where had the body been hidden for two weeks? And how could the perpetrator get in and out of the apartment?

As more disturbing things start to take place, Alva is drawn into a sick and twisted game by a killer who is hiding in plain sight. But Alva is just a child and has no idea just how deadly her new friend might be…

The Man in the Wall is a thrilling and stylish Scandinavian thriller.

I think after reading the description I was a little wary about starting this book at night. However having two young children and not sleeping well at the best of times it really is the perfect time for me to read. So the question is did I have to sleep with the lights on?

It's safe to say I felt like checking the doors and windows were locked especially as I live in a flat so I was instantly on alert. Then as I got into the story I ended up feeling even more on edge. The Man in the Wall is such an intriguing story and I loved how character driven it was. Focusing on some of the people who live in the apartment block and also the mysterious person on the periphery of their lives.

Alva is a wonderful character she gives off a vibe of being older than her years and has such a sad aura about her that definitely made her all the more engaging for me. Even though she is with her family she is missing her father and there is the added mystery as to where he is, the reader is as much in the dark as Alva.

There are some tense and creepy moments which definitely made me sit up and take notice. I loved the touch of paranormal it helped to add an extra depth to the story. The Man in the Wall moves at a good pace with a brilliant combination of tense moments but then also showing the people who live in the apartments going about their daily lives. It's a contrast that works well moving from showing the more normal lives to the stranger aspect of life in the apartments.


A compelling story that will pull you right in, The Man in the Wall is brilliantly dark and addictive!

With thanks to Sarah at Bloodhound Books for the invite to join the tour and my copy. This is my honest and unbiased opinion. 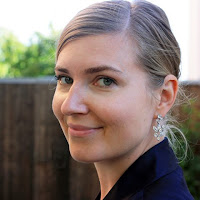 Emma Ångström is an author and architect. She has a Master’s degree in architecture from the Royal Technical University in Stockholm and from Parsons in New York. Besides her writing she currently works as head of communications at an architectural firm in Stockholm, Sweden.

She was born in 1982 in Västerås, Sweden, and started her writing career as a journalist at the age of 17. Since then, she has also worked as a lighting designer, and written non-fiction books about lighting design and architecture.

Ångström made her debut in 2009 with the novel AND ALL IS DISTORTED (Och allt är förvridet). In 2016 THE MAN IN THE WALL was released, a remarkable and nerve-wracking thriller with a ”monster” it is hard not to feel certain sympathy with. Condensed writing shaping characters of real flesh and blood, a steady hand’s brushwork forming each piece of the portrait’s originality to a whole, stylistically assured.