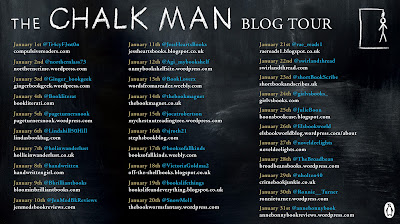 Thank you for stopping by today as I take part in the blog tour for The Chalk Man by C. J. Tudor. I'm delighted to be sharing my review with you today but first of all let's take a look at the description for the book... 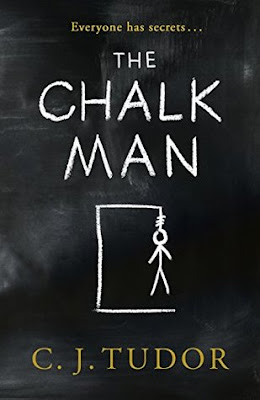 In 1986, Eddie and his friends are just kids on the verge of adolescence. They spend their days biking around their sleepy little English village and looking for any taste of excitement they can get. The chalk men are their secret code; little chalk stick figures they leave for each other as messages only they can understand. But then a mysterious chalk man leads them right to a dismembered body, and nothing will ever be the same.
In 2016, Eddie is fully grown, and thinks he's put his past behind him. But then he gets a letter in the mail, containing a single chalk stick figure. When it turns out his other friends got the same messages, they think it could be a prank... until one of them turns up dead. That's when Eddie realizes that saving himself means finally figuring out what really happened all those years ago.
Expertly alternating between flashbacks and the present day, The Chalk Man is the very best kind of suspense novel, one where every character is wonderfully fleshed out and compelling, where every mystery has a satisfying payoff, and where the twists will shock even the savviest reader.

It's always great to have an opening that will instantly grab you and The Chalk Man is definitely one of these books. I really wasn't expecting the events at the start of this book at all and I loved that I ended up being surprised especially as I didn't know where the story would go next. Now after this brilliant start I did wonder if the story would dip a little and lose some of the tension but this was not the case. The plot moved smoothly and even though it wasn't necessarily always fast paced there was something about this story that completely wrapped me up in the characters lives and I was so invested in discovering the truth.

I don't really want to go into too much detail regarding the plot but the story does alternate between two timelines - 1986 and 2016. I know that in some instances this can come across as confusing however in the case of The Chalk Man it just ends up complimenting the story so well. Looking back after finishing the book I couldn't make my mind up as to which time period I preferred and I think this is definitely down to the smooth transitions from one time to another. Secrets and truths are revealed slowly but surely in a way that made me not want to put this book down. I enjoyed each time period equally as I got to know the characters not only in 2016 but also their younger selves feeling like I was right there with them.

I loved all of the twisty intense turns that this mystery took me on, the whole book easily grabbed hold of me and refused to let go. The Chalk Man is such an intriguing story and one that has plenty of shocks and surprises waiting to jump out of the pages at you. There was also a wonderful atmospheric and almost chilling aspect to the story that I loved.

A wonderfully dark and compelling read!

With thanks to Jenny at Michael Joesph Books and Netgalley for my copy. This is my honest and unbiased opinion.

C. J. Tudor was born in Salisbury and grew up in Nottingham, where she still lives with her partner and young daughter. Her love of writing, especially the dark and macabre, started young. When her peers were reading Judy Blume, she was devouring Stephen King and James Herbert.

Over the years she has had a variety of jobs, including trainee reporter, waitress, radio scriptwriter, shop assistant, voiceover artist, television presenter, copywriter and now author. The Chalk Man is her first novel.