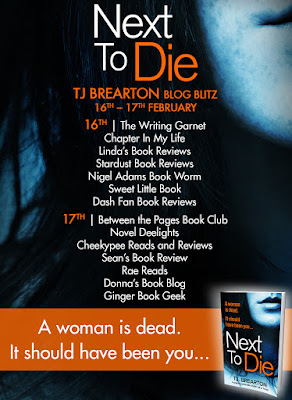 I'm delighted to be one of the stops on the blog blitz for Next To Die by T.J. Brearton. I will be sharing my review but first of all let's take a look at the description for the book... 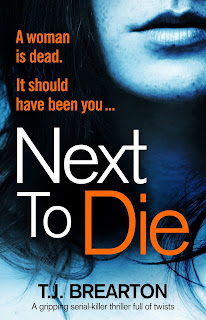 When a social worker is brutally murdered, Detectives Mike Nelson and Lena Overton are straight on the scene. But with a long list of potential suspects, can they work out who’s next before the killer strikes again?

It’s Lake Haven’s first murder in eighteen years, and the community is terrified – especially Bobbi, who was not only supposed to be on duty that night, but also has the same long dark hair as Harriet and drives the same blue car. Now Bobbi lives in constant fear that the murderer will be back for her…

When Mike and Lena make a link to a missing-persons case and uncover a wide-spread grudge against social services, they know they’re close to uncovering the killer – but can they connect the last few dots and stop him before he takes another victim?

An addictive, page-turning thriller that will keep you guessing to the very end. If you love Robert Dugoni, John Sandford or Karin Slaughter, Next to Die is for you.

The opening to this story will definitely grab your attention and leave you wondering what will happen next and of course who is next to die. The plot isn't necessarily the most fast paced however I enjoyed how T.J. Brearton built up the characters. This way of writing the story made them more realistic and gave the reader an added connection to them. Next To Die had a good balance showing the investigation carried out by Mike and Lena but also the social services side with Bobbi. Seeing how all three go about their lives during the case and showing all the twists and turns unfold.

The story moves steadily and pulled me into the characters lives as the tension mounts towards a really thrilling conclusion. There is a little bit of romance which was interesting to see play out. As usual I tried playing detective but failed miserably! Even though it's fun to try and figure things out it's also just as worthwhile sitting back and enjoying the story come together. T.J. Brearton did a great job of keeping me on my toes as I was never too sure as to what would happen next.

T.J. Brearton is the author of thirteen published novels of crime fiction, including detective thrillers, police procedurals, psychological suspense, and one paranormal crime story. His eBooks have been best-sellers on the Amazon kindle fiction Top 100 list. He lives in the Adirondacks with his wife and three children where he writes full time.