I'm delighted to be one of the stops on the blog tour for The Betrayal by Anne Allen and sharing my review today. First of all let's take a look at the description for the book... 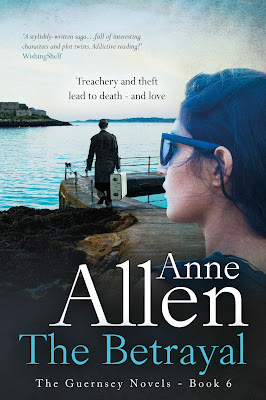 Treachery and theft lead to death – and love

1940.  Teresa Bichard and her baby are sent by her beloved husband, Leo, to England as the Germans draw closer to Guernsey. Days later they invade…

1942. Leo, of Jewish descent, is betrayed to the Germans and is sent to a concentration camp, never to return.

1945. Teresa returns to find Leo did not survive and the family’s valuable art collection, including a Renoir, is missing. Heartbroken, she returns to England.

2011. Nigel and his twin Fiona buy a long-established antique shop in Guernsey and during a refit, find a hidden stash of paintings, including what appears to be a Renoir. Days later, Fiona finds Nigel dead, an apparent suicide. Refusing to accept the verdict, a distraught Fiona employs a detective to help her discover the truth…

Searching for the true owner of the painting brings Fiona close to someone who opens a chink in her broken heart. Can she answer some crucial questions before laying her brother's ghost to rest?

Who knew about the stolen Renoir?

And are they prepared to kill – again?

First of all I have to mention that The Betrayal is part of a series but don't let that put you off. I haven't had chance to read any of the previous books but I wasn't confused at all so I would easily class this book as a standalone.

There is a mystery running through this story that takes us right back to 1940 through to 1945 and also to 2011. The transition from the different timelines was smooth and I loved how the reader discovers little snippets of information that build up the story and has repercussions in 2011. It was so interesting to see the story from Leo's perspective along with showing Guernsey in that time period I felt like it was brought to life brilliantly by Anne Allen. I enjoyed both time periods but there was something so fascinating about the storyline in the past as we see how Leo coped in Guernsey during the occupation.

Fiona is a likeable character and you can feel her loss but she is determined to discover the truth even if it means putting herself in danger. I was willing her on to put everything together and make sure justice was served. The story moves pretty quickly keeping my interest throughout there was some tension to the story, a bit of danger along with a dash of romance.

There is so much packed into this story secrets, lies, history and a mystery that spans decades all coming together to make a very intriguing story.

Anne Allen lives in Devon, by her beloved sea. She has three children, and her daughter and two grandchildren live nearby.  Her restless spirit has meant a number of moves which included Spain for a couple of years. The longest stay was in Guernsey for nearly fourteen years after falling in love with the island and the people. She contrived to leave one son behind to ensure a valid reason for frequent returns.

By profession, Anne was a psychotherapist, but long had the itch to write. Now a full-time writer, she has written The Guernsey Novels, six having been published and the seventh, The Inheritance, is due out in 2018.

A Triple Celebration and a Price Reduction!


This is in celebration of Anne Allen's birthday, the 6th anniversary of the publication of 'Dangerous Waters' and the recent publication of book 6, 'The Betrayal'.

If you get chance why not follow along with the rest of the tour, see below...