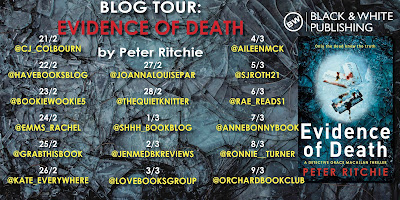 Thank you for stopping by I'm thrilled to be one of the stops on the blog tour for Evidence of Death by Peter Ritchie. Today I will be sharing my review but first of all let's take a look at the description for the book... 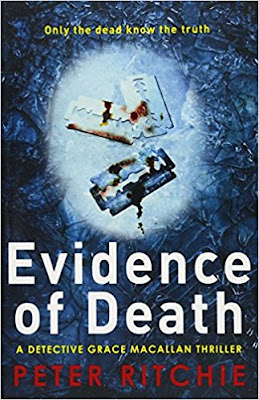 ONLY THE DEAD KNOW THE TRUTH

Detective Grace Macallan returns, with a case that sees underworld rivalries spill out onto the streets. And with conflicting interests between the police in Scotland, Northern Ireland and the Security Services, can Grace hold her nerve? From Peter Ritchie, previously Head of the Organised Crime Unit in the National Criminal Intelligence Service and a UK Liaison Officer to Europol in the Hague, comes Evidence of Death. Written with authenticity that can only come from real-life experience, this standalone police-procedural is sure to keep you at the edge of your seat.

Scarred by the Troubles in Belfast, Billy Nelson returns to his Loyalist roots following his discharge from army service. But Belfast and the people he knew have changed, and after his gang are responsible for a series of violent attacks on innocent victims, he is forced out of the city and moves in on the drugs business in Edinburgh.

Taking on the family who have been the main players in the city for years, a battle for control amongst the criminal underworld of Edinburgh, Glasgow and Belfast ensues, and the balance of power is upset...

Grace Macallan, recently promoted to Superintendent in the Specialist Crime and Counter Terrorism Directorate, has her hands full as a series of incidents leaves a trail of victims. As the old demons of the Troubles come back to haunt her again, can Grace keep the streets of Scotland safe? The pressure is rising as she has to balance the conflicting interests of the police in Scotland, Northern Ireland and the Security Services, who all have an interest in Nelson and his paramilitary contacts in Belfast...

Evidence of Death is the second book in the Grace Macallan series and even though I started with this book I would still say that it can be read without any confusion. However as with all series it can be best to start at the beginning to just get a better feel for the character history.

This book moves at a steady and constant pace but this helped me to get a better understanding of both the characters and story. The characters in this book definitely have a realistic feel to them there is definitely a dark and violent edge to some of them. I thought that Grace's character was developed really well and felt like I got to know her along with her vulnerable side too.

Evidence of Death had an intricate plot which easily drew me in along with some hard hitting themes such as drugs, violence and murders but it is all packaged into a very immersive story. It's safe to say that there are a few uncomfortably dark moments throughout this book and if it had been a film I would have probably been watching through my fingers. However I just couldn't stop reading and that just shows you how descriptive and well written it was that I was completely pulled into the story even for the more graphic scenes.

Evidence of Death has some dark and gritty elements with a very authentic feel!

With thanks to Lina Langlee at Black & White publishing for the invite to join the tour and for my copy. This is my honest and unbiased opinion.

Peter Ritchie is a retired senior police officer. The real-world authenticity in his novels comes from vast experience gained working in CID, murder squads, Serious and Regional Crime Squads and Europol. He is a regular lecturer and commentator on the subject of transnational organised crime. In his spare time, Peter also enjoys writing poetry and short stories, painting and volunteering at St Columba’s Hospice and the Bethany Trust.
at March 06, 2018