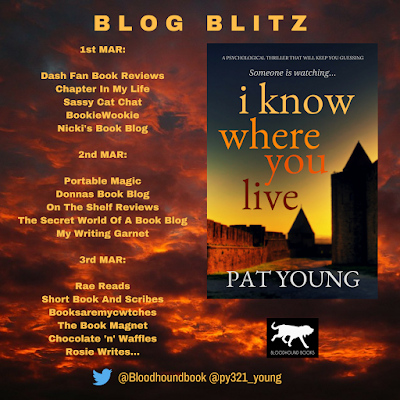 Thank you for stopping by I'm delighted to be sharing my review as part of the blog blitz for I Know Where You Live by Pat Young. First of all though let's take a look at the description for the book... 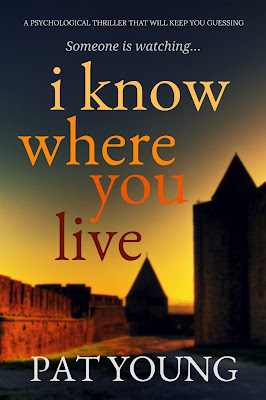 Penny believes she’s being watched. Yet no one should know where she lives.


Penny seizes the chance of a new life for her family when her husband is offered a job in Europe.

At the airport they meet charming Sophie, fluent in French and looking for work as an au pair.


Penny, struggling to cope in France, offers Sophie a job and she soon becomes an important part of the family’s life. But Sophie is hiding something.

Then Penny’s toddler son, Ethan, is abducted and an international hunt for the child begins.

The police beg Penny and her husband to take part in a television appeal but the couple refuse.

Unknown to the police, Penny and Seth have new identities and are determined to lay low and protect them. But it may be too late for that.

Who has taken Ethan and why?


Are the couple’s true identities linked to the abduction?

And who has been watching them?

To save her son Penny may have to put her own life on the line.

I Know Where You Live is a sequel to Till the Dust Settles however it easily reads as a standalone so don't worry if you have not read it beforehand. This story had a different feel to it but this wasn't necessarily a bad thing for me.  The subject matter of child abduction is always going to make for a tense and unpredictable story. There is a good character build up as we meet married couple Penny and Seth along with their children. Then we are introduced to Sophie who seems perfect, but is she? Even though there is a slightly slower start I felt as if the tension was being ramped up and I was just waiting for the moment when the abduction would take place.

There are some tense scenes and I thought that seeing the story from a couple of perspectives helped to keep the momentum going. This story also packs an emotional punch as you experience every terrible thought and emotion with Penny and Seth.

Moving at a good pace the reader is pulled into a tense and unpredictable story.

Pat never expected to be a writer. Then she found a discarded book with a wad of cash tucked in the flyleaf. ‘What if something awful happened to the person who lost this book?’ she thought, and she was off.

Pat knew nothing of writing, but she knew a thing or two about books, having studied English, French and German at Glasgow University. A passion for languages led to a career she loved and then a successful part-time business that allowed her some free-time, at last.

Pat had plans, none of which included sitting at her desk from daybreak till dusk. But some days she has to. Because there’s a story to be told. And when it’s done, she can go out to play. On zip-wires and abseil ropes, or just the tennis court.

Pat writes psychological thrillers. Her debut novel Till the Dust Settles, has been awarded the Scottish Association of Writers’ Constable Stag trophy. Following publication in July
2017 Pat was delighted to be chosen as an ‘emerging talent’ for Crime in the Spotlight and read from Till the Dust Settles to an audience at Bloody Scotland – another dream come true.

Published by Bloodhound Books, I Know Where You Live is the much-anticipated sequel to Pat’s gripping and unmissable debut thriller, Till the Dust Settles. It too is a psychological thriller with a skilfully told story that makes for an enjoyable stand alone read. It will hook you from the start.