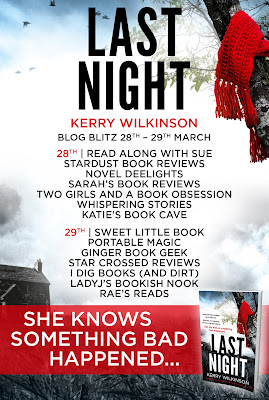 I'm thrilled to be taking part in the blog blitz for Last Night by Kerry Wilkinson and sharing my review today. First of all though let's take a look at the description for the book... 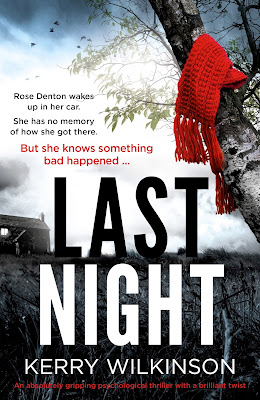 Rose Denton wakes up in her car. She has no memory of how she got there. But she knows something bad happened…

There’s blood on the windscreen and bonnet – but it’s not hers and there’s no sign of anything or anyone she might have hit. The last thing she remembers is being in a hotel on a business trip but now she’s miles away.


Back home and her daughter’s boyfriend is missing. The last thing he did was argue with Rose over money. He left no note, no text, no clue as to his whereabouts.


The police have questions – and so does Rose’s family. But those are little compared to the ones she has for herself.


What happened last night? And, perhaps more importantly, does she really want to know the answer?


A totally addictive psychological thriller which will keep you turning the pages until the final dramatic twist.

This is the first book that I have read by Kerry Wilkinson meaning I didn't really have a clue as to what to expect, so what did I think...

I'm going to be pretty vague about the plot of Last Night as I would hate to ruin the story with any spoilers. What I will say is that it kept me on my toes with a plot that made me suspicious of everyone and everything. There is an almost claustrophobic effect that surrounds the story as the reader is as much in the dark as Rose.

The secrets and facts are revealed at perfect moments along the way often bringing up more questions however this just made me even more determined to discover the truth. Rose's hazy recollections of that night definitely help to ramp up the tension with revelations about the past being shown too. I'm not sure that I found Rose completely likeable but I think this just added to the mystery of her character and made things even more intriguing. I have to admit to having plenty of theories and I enjoyed trying to piece everything together. Kerry Wilkinson expertly built up the story along with my curiosity with just the right amount of tension and suspense.

With a pace that is guaranteed to keep you turning those pages, Last Night sent me on a very twisty journey before I finally discovered the truth!

With thanks to Noelle at Bookouture for my copy of the book. This is my honest and unbiased opinion.

Kerry Wilkinson has had No.1 bestsellers in the UK, Canada, South Africa and Singapore, as well as top-five books in Australia. He has also written two top-20 thrillers in the United States.


As well as his million-selling Jessica Daniel series, Kerry has written the Silver Blackthorn trilogy - a fantasy-adventure serial for young adults - a second crime series featuring private investigator Andrew Hunter, plus numerous standalone novels. He has been published around the world in more than a dozen languages.

Originally from the county of Somerset, Kerry has spent far too long living in the north of England, picking up words like 'barm' and 'ginnel'.

When he's short of ideas, he rides his bike or bakes cakes. When he's not, he writes it all down.


Eye For An Eye (Jessica Daniel): Out now