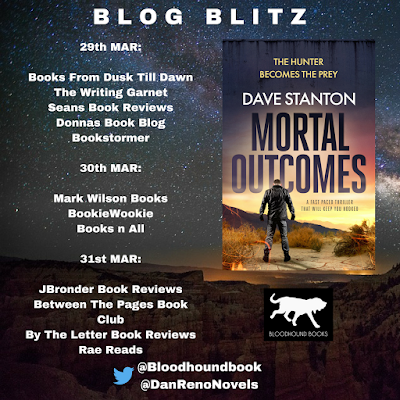 Thank you for stopping by I hope everyone is having a lovely Easter break! I'm delighted to be sharing my review for Mortal Outcomes by Dave Stanton as part of the blog tour today. First of all though let's take a look at the description for the book... 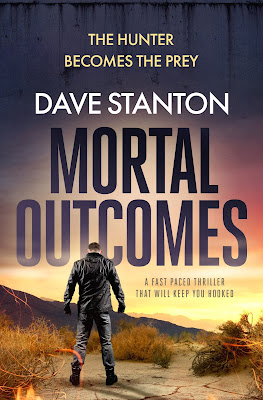 When a pair of accused rapists from a New Jersey-based gang surface in South Lake Tahoe, bounty hunter Dan Reno is called in. The first is easy to catch, but the second, a Satanist suspected of a string of murders, is an adversary unlike any Reno has faced before. After escaping Reno’s clutches, in the desert outside of Carson City, the target vanishes. That is, until he makes it clear he intends to settle the score.

To make matters worse, the criminal takes an interest in a teenage boy and his talented sister, both friends of Reno’s.

Wading through a drug-dealing turf war and a deadly feud between mobsters running a local casino, Reno has to hunt a ghost-like adversary who is calling all the shots.

The more Reno learns more about his target, the more he’s convinced that mayhem is inevitable unless he can capture him quickly. He’d prefer it to be clean, without further bloodshed. But sometimes that isn’t possible, especially when Reno’s partner Cody Gibbons decides it’s time for payback.

Even though this is book 3 in the Dan Reno series I still think it can be read as a standalone so don't let that put you off starting mid way through a series. However to fully get the characters background it may be best starting at the beginning. Mortal Outcomes is another fast paced and action filled story with trouble and complications galore for Dan and his friend Cody. I love their friendship and I have to say it's one of my favourite parts of not only this book but the whole series. Cody's one liners always manage to make me smile and offer a lighter touch to some of the darker sides to the plot. They balance each other out perfectly and I can't wait to see what is in store for them in the next book.

In this story we follow Dan on a difficult case as he tries to track down a sinister and dangerous murderer and this is when the tension really ramps up. There was also a side story that was really interesting to see play out. I really think the location adds something to the story with a gritty and darker side where under the surface there are some evil and vicious characters lurking.

Action packed with a gritty edge, guaranteed to have you racing through to the end! 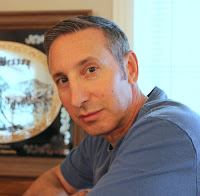