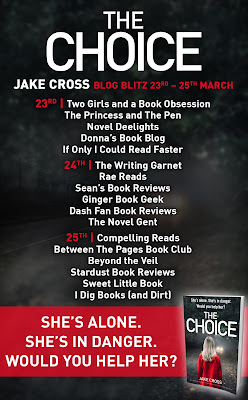 Thank you for stopping by you can catch my review for The Choice by Jake Cross as part of the blog blitz today along with some other fabulous stops. 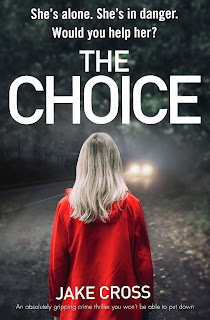 On a wet road in the black of night, Karl Seabury is driving home to his pregnant wife. Suddenly, caught in his headlights in the middle of the road is a woman shaking with fright.

The woman says her name is Liz Smith, that her home was attacked, and that she was the only one to escape.

In a split-second decision, Karl decides to help her to safety. But Liz is hiding a dark secret and now his good deed has put his family in terrible danger...

Right from the start this story pulls you into a nightmare situation and I loved how this made me think about what choice I would make. To be honest this was definitely one time that I'm glad I can't drive ;) The story is for the most part fast paced and has plenty of tense moments like a cat and mouse game that makes things very interesting.

I found the chapters told from the different characters really helped to give the story a more rounded feel especially as you got into the thought process of a pretty despicable but intriguing character.

Karl is an interesting character he makes a split second decision and then has to face the fallout from it putting not only himself in danger but his wife. After all hindsight is a wonderful thing but I do think his actions could be classed as a little unbelievable at times. As once you had initially helped would you go any further, I guess in a way he is being the Good Samaritan but really finds himself in the thick of it. I decided not to over think some of the actions from the characters and just let myself get taken away with the action and I’m really glad that I did. As what follows is tension filled with a few surprises along the way. Did Karl make the right choice, well I'll let you decide that for yourself. 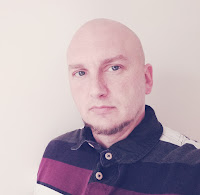 Jake has been making stuff up from a real early age. His parents never believed his silly lies when he was young, so he still has no idea why he thought he could invent a decent story as an adult. But he kept trying, and here we are. THE CHOICE is his first novel, the first of three thrillers to be published by Bookouture, and he hopes you like it. If you don't, he at least hopes you don't ask for a refund.