I'm delighted to be one of the stops on the blog tour for The Deal by S C Cunningham and I will be sharing my review with you today. First of all though let's take a look at the description for the book... 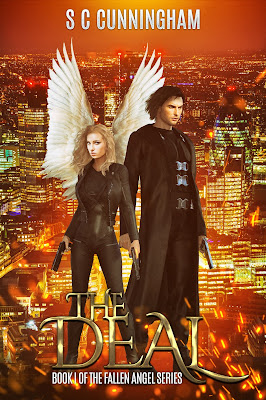 A Paranormal Thriller for those who dare to believe that there is something else out there...
At the age of four, Amy was taken…She survived.
A week later, another little girl was taken…She didn't.

Angry that a bad man has gotten away with murder, feisty young Amy Fox makes a deal with God. When she dies, if she’s been a good girl, would God let her sit on a cloud for a while, invisible, to get bad people who slip through his fingers?

She awakens in the afterlife to discover an international network of like-minded souls who’ve all made the same deal. A sophisticated MI5-esque justice machine sits in the skies, protecting, righting wrongs, tracking criminals, and working within strict rules of play…all against time.

Each country's Unit shares intelligence, surveillance, and resources to deactivate dangerous situations. The only evidence they leave behind during their earthly visits is a small white feather sashaying to the ground.

In a chaotic world, powerful adversaries try to close her Unit down. A complex SAS vigilante has been assigned to work as her partner, but with his jealous violent ex-girlfriend on her heels and with her own vendetta to settle, Amy has never worked so hard in her entire earthly life. She has to wonder if making a deal with God was a mistake.

As soon as I read the description I was intrigued and I couldn't wait to start reading. The start of this book definitely got my attention and I was looking forward to seeing where the story would go from there.

I do have to mention that there are some dark themes within this book which were hard to read at times. With some graphic descriptions that are definitely for 18+ ages. However I enjoyed the way the Unit went about their work especially Amy who's character has been through so much but came out the other side determined to deal with the people who commit evil acts. Then add in Jack to the mix which creates a fiery and unpredictable combination along with a hint of romance.

The premise really caught my attention, wouldn't it be great if there were people righting the wrongs and pursuing anyone who had committed terrible crimes. There were a few twists that I didn't see coming and these made for a really interesting story. The pace was really good with the momentum being kept throughout giving the reader a very dark and twisty tale!

Four stars for me! 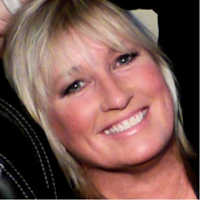 Author of The Penance List, Unfinished Business and The Deal,  Siobhan C Cunningham (S C Cunningham) creates Paranormal Romance and Psychological Crime Thrillers with a skilled mix of fuelled tension, dark humour, and pulsating sex scenes. Having worked in the industries she writes about, her novels offer a fresh level of sincerity and authority, rare in fiction.

Abducted as a child, she survived; and every night for months afterward, she prayed to God, asking for a deal. This personal journey sparked the fuse behind the intriguing and riveting fictional world she portrays in The Deal, the first in The Fallen Angel series. Twenty years later Cunningham crossed paths with a violent serial attacker, sowing the seed for her mind-bending thriller, The David Trilogy; The Penance List, Unfinished Business, For My Sins.

An ex-model, British born of Irish roots, she married a rock musician and has worked in the exciting worlds of music, film, sports, celebrity management and as a Crime Investigator for the British Police (Wanted & Absconder Unit, Major Crime Team, Intelligence Analyst, Investigations Hub).

Her first novel, The Penance List has been adapted to film screenplay.

She is the proud mother to contemporary Artist Scarlett Raven and owned by three dogs.