I'm delighted to be sharing my review for The Haunting of Hattie Hastings (Part 1) by Audrey Davis. If you check back tomorrow you will also find my review for part 2 as I take part in the blog tour arranged my Rachel's Random Resources. 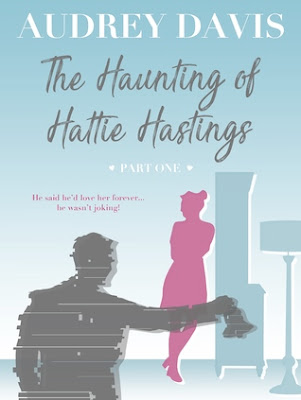 Part one of a fun-filled but moving romantic comedy about life, death and letting go.
Hattie Hastings is happily married, even if husband Gary drives her up the wall at times. When tragedy strikes, she is left alone and heartbroken, with only an assortment of family and friends to prop her up.

Struggling to cope, she is left reeling when her deceased other half returns to haunt her, popping up at the most inappropriate times, with an unorthodox way of flagging his arrival.

Hattie struggles to convince anyone that Gary has returned. Not even her best friend, Cat – now free from the cruel and controlling Stewart – will believe her story.

Why has Gary returned? Will he allow Hattie to find happiness again, or will he stand in the way of any future romance? And what will Cat do when her slimy ex-husband tries to worm his way back into her affections?

The Haunting of Hattie Hastings will make you laugh, cry and count the weeks until Part Two …

If you are short on time but looking for a fun story with an emotional edge then look no further. The Haunting of Hattie Hastings is a pretty quick read and I found myself smiling along with the characters especially whenever Gary made an appearance. I loved Hattie and Cat's friendship it was definitely a highlight for me. I loved the one liners and the personalities of all the characters as they felt realistic and down to earth. However the relationship between Hattie and Gary really made this book. There is a whole lot of love between the pair and I couldn't help but also feel sad that it had to end the way it did. Gary coming back helped to lift the emotional tone of the book and made it a much more fun experience.

It's a fast moving story and it really didn't take me long to read at all. With this story being part one I pretty much expected a cliffhanger ending and once I finished reading I couldn't wait to pick up part two.

The Haunting of Hattie Hastings is both warm and witty showing the reader a quirky take on the afterlife and those left behind. 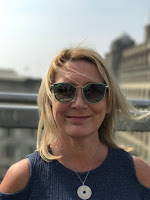 Always a survivor, Audrey sought out similar-minded friends (i.e. slightly bonkers), got the children into a good school and thought about taking up writing again. Sadly, thinking about it was as far as she got, unless you count shopping lists. Then, hubby drops another bombshell. Switzerland. As in – it's packing time again. Off to the land of cheese, chocolate, scarily efficient trains and a couple of teeny, tiny issues. Like driving on the 'wrong' side of the road and speaking a foreign language (French). The former was conquered fairly quickly (we'll skip over the wall demolition in week two), the latter remains an ongoing battle of the hopeful against the hopeless. At least she provides amusement for the local workforce.
It wasn't until 2016 that Audrey rediscovered her writing mojo with an online Writing Fiction course. From there, her first novel – A Clean Sweep – was born, although it took a bit longer than nine months from conception. A short, darker prequel – A Clean Break – followed, and in November 2017 she published the first in a novella trilogy, The Haunting of Hattie Hastings Part One. Part Two is published on 21 March 2018, with the conclusion following in May/June. After which she might have a wee lie down …