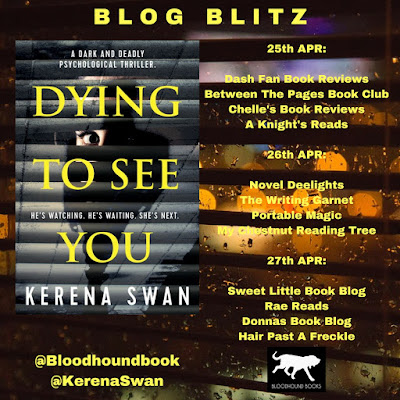 I'm thrilled to be one of the stops on the blog tour for Dying To See You by Kerena Swan and sharing my review today. First of all though let's take a look at the description for the book... 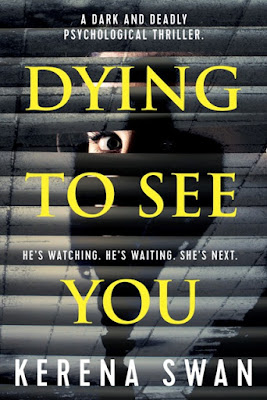 When Sophie is told to organize care for elderly Ivy, she is unaware that by meeting Max, Ivy’s grandson, her life will be turned upside down.

As Sophie’s involvement with Max and Ivy increases she becomes more distracted by her own problems.

Because Sophie is certain she is being watched.

For a while Ivy relishes Sophie’s attention, but soon grows concerned of the budding relationship between Sophie and Max.

Torn between Sophie and his grandmother, Max cuts ties with the care agency, leaving Sophie hurt and confused.

Meanwhile there is a murderer killing women in the area.

Is there a link between Sophie’s stalker and the killings?


Soon Sophie will learn that appearances can be deceiving.

I think one of the best things about this story was that it had the ability to well and truly surprise me. I wish I could go into more detail but I am going to try to be as vague as possible, let's face it no one likes spoilers! However I will say that Dying To See You definitely has some twisty and tense moments! There was great character development throughout the story as you get to see Sophie's daily life along with her struggles whether it be financially or her families home life with her two daughters. It felt realistic and made me want to root for her character even more.

The pacing of the story is pretty good especially once you hit the half way mark as I couldn't wait to see how it would all end. I loved that I was kept on my toes throughout the book with the plot taking a very interesting and different path to the one I was necessarily expecting. Kerena Swan's writing had a way of pulling me right into this set of characters lives and caring about what would happen to them.

Dying To See You is thrilling at times along with hiding some deadly surprises just waiting to jump out at the reader!

With thanks to Sarah at Bloodhound Books & Netgalley for my copy. This is my honest and unbiased opinion. Kerena lives on the Bedfordshire/Buckingham border with her husband, son and two cats. She also has two daughters and two granddaughters.

12 years ago, following a life-time career in social work and management, Kerena set up a company providing support for children with disabilities.  Highly successful, the company is rated ‘Outstanding’ by the Care Quality Commission, which Kerena considers her greatest achievement thus far. However, following serious illnesses last year she decided to attempt to fulfil her long-held ambition of writing a novel and getting it published. She has yet to tick off other achievements from her bucket list such as playing Moonlight Sonata on the piano all the way through and being stopped for speeding in a red Ferrari at the age of 80 but can tick off building a brick wall.

After many years of writing professionally in the course of her work, Kerena has discovered the exhilaration of writing fiction and can be found at all hours in front of her computer.  Her husband (worried about his dinners being cooked) has threatened divorce if she writes another book so she’s told him she will write a trilogy.

‘Dying to See You’ is Kerena’s first novel and she has already started work on her second book ‘I Let You In’.  Drawing on her extensive knowledge and experience in the problematic world of social work, Kerena adds a unique angle to the domestic noir genre.
Author Link: