The Next Girl by Carla Kovach @CKovachAuthor #BlogBlitz @bookouture #Review 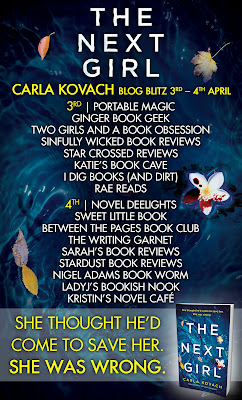 I'm thrilled to be one of the stops on the blog blitz for The Next Girl by Carla Kovach and sharing my review today. First of all though let's take a look at the description for the book... 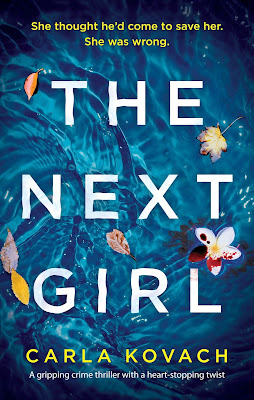 You thought he’d come to save you. You were wrong.

How can someone vanish without a single trace?

Deborah Jenkins pulls her coat around her for the short walk home in the pouring rain. But she never makes it home that night. And she is never seen again…

Four years later, an abandoned baby girl is found wrapped in dirty rags on a doorstep. An anonymous phone call urges the police to run a DNA test on the baby. But nobody is prepared for the results.

The premise for this story is something that will play on your fears and shows you a woman caught up in a living nightmare. You will also see the investigation play out as we follow Detective Gina Harte who is determined to solve the case. Gina has her flaws but always tries to do her best as she has to juggle her family life with work. One of the things that I enjoyed was how well Carla Kovach developed her characters giving me an emotional connection to them that made this book so addictive for me.

The Next Girl has a disturbing and dark storyline but it isn't really graphic in it's descriptions it is left more to the reader to fill in the blanks, I guess in a way this can be even more sinister. For some of the story I found myself sat upright on the sofa just waiting to see everything play out. It didn't take me long to read this story and I think this was down to a overall balanced feel as I was shown both the police work involved but the more personal side to what happens when a person disappears along with those left behind. You also have a deranged abductor who made my skin crawl but also curious to see if I would find out his motives and to see if he would be caught. I'm delighted that this is the start of a new series and I look forward to seeing what Gina's next case will be!

A darkly addictive start to a new detective series!


With thanks to Noelle at Bookouture for my copy. This is my honest and unbiased opinion.

Carla Kovach was born in Birmingham, UK and now resides in Redditch, Worcestershire. Author of supernatural drama 'Flame,' psychological thriller 'To Let,' crime thriller 'Whispers Beneath the Pines,' and holiday comedy, 'Meet Me at Marmaris Castle.' Carla also writes stage and screenplays, some of which have been produced in the Worcestershire area. Her feature film 'Penny for the Guy' is being made and is set for release in 2019.

Her latest book, The Next Girl, has been published by Bookouture. It is the first in the DI Gina Harte crime series.