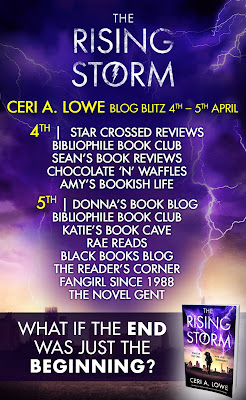 Thank you for stopping by I'm delighted to be sharing my review for The Rising Storm by Ceri A. Lowe as part of the blog blitz today. First of all though let's take a look at the description for the book... 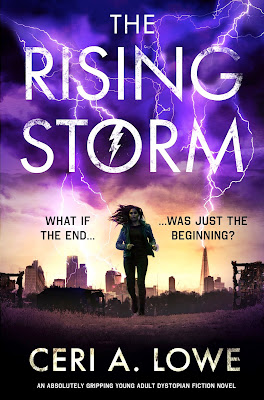 What if the end of the world was just the beginning?

15-year-old Alice Davenport was a loner and an outcast before the Storms swept away everything she knew. Saved from the ravaged remains of her city by the mysterious and all-powerful Paradigm Industries, her fierce independence and unique skills soon gain her recognition from the highest levels of command. But their plans to rebuild civilisation from scratch mean destroying all remnants of the past – no matter what, or who, gets left behind.

Alice must decide if she will fight for the old world, or the new…

15-year-old Carter Warren is woken from the Catacombs after years of cryonic sleep. He’s determined to do whatever it takes to climb the ranks to Controller General – until he realises the Industry’s control methods have become harsher than ever. The Barricades make sure nothing from the Deadlands can get in to the Community – and no one can get out. And a shocking discovery about his own family causes Carter to question everything he’s ever known…

As Alice becomes entangled in the Industry’s plan for the future, and Carter delves into the secrets of his past, they must make sacrifices which threaten to tear them apart. And both of them are forced to confront an impossible question…

Stay loyal to their loved ones from the old world? Or dare to build a new one?

Every so often I really enjoy reading a dystopian story it really is a true escape as there is usually danger and you also get to see the ways in which a world can change along with it's inhabitants. So with that in mind I jumped at the chance to read The Rising Storm. So what did I think... Well I enjoyed following both Carter and Alice's story although I guess it did take me a couple of chapters to settle into things. I thought both story strands worked really well within the book and each character offered a different feel to the plot. If I had to choose a favourite I would have to say that Alice's story just slightly edged it for me and it is probably down to the fact that I was so intrigued about the storms that I loved hearing her first hand experiences of it. The transition from one character to the other was pretty smooth and I easily became invested in both characters just for different reasons. Although both characters are equally determined to survive and create a better society for everyone.

The plot moves fairly quickly with little bits of information revealed slowly but surely and I would say that there are also some differences to the usual dystopian story that makes it stand out a little bit more for me. Even though it is a YA story don't let this put you off I still think it will appeal to all ages after all I'm in my thirties and I really enjoyed it! This is the first book in the series so be prepared to instantly want to read the next book I know that's how I felt anyway.

The Rising Storm has engaging characters and a fast paced plot that will take you on quite a journey!


Four star from me! 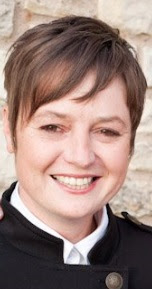 When Ceri isn’t writing, she’s a self-employed project management consultant specialising in financial services. She lives with her partner in Bristol, England and has various obsessions including all things Spanish, travelling and, of course, writing.