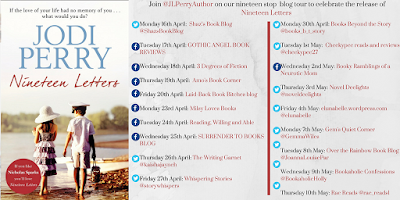 I'm delighted to be taking part in the blog tour for Nineteen Letters by Jodi Perry and sharing my review today. First of all though let's take a look at the description for the book... 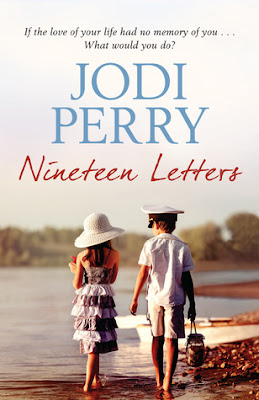 The 19th of January, 1996 . . . I'll never forget it. It was the day we met. I was seven and she was six. It was the day she moved in next door, and the same day I developed my first crush on a girl.
Then tragedy struck. Nineteen days after our wedding day, Jemma was in an accident that would change our lives forever. When she woke from her coma, she had no memory of me, of us, of the love we shared.
That's when I started writing her letters. The stories of our life. Of when we met. About the happier times, and everything we'd experienced together.
What we had was far too beautiful to be forgotten.

So first of all I have to admit that I'm a pretty emotional person, I often cry while watching films, TV shows and of course while reading too. When I read the description I knew instantly that I wanted to read it but was also worried about becoming a blubbering mess. So what did I think...

I loved the idea of a certain number playing a part in your life whether it is a coincidence or if there is something else at play, it really is an interesting idea. Now I don't think I have had a certain number mean as much as the number nineteen does to Jemma and Braxton but I really enjoyed this part of the plot.

Nineteen Letters is such a romantic and at the same time heartbreaking love story. Jodi Perry has created two characters who are made for each other but of course life has other devastating plans. There were a range of emotions that I went through while reading this book. At the beginning I was smiling at Jemma and Braxton's closeness and then felt the pain, hurt and hope that Braxton goes through. Along with the difficulties that Jemma faces and how scary everything seems to her. If you are wondering if there were tears, well of course there was although it's safe to say that I was well and truly charmed by this book! If you are a romantic you will adore both the story and the characters along with hoping for a happy ever after.

Nineteen Letters is a stunning story of love, hope and determination.

With thanks to Millie at Little Brown for my copy.

Jodi Perry is a wife and mother, and was born in Sydney, Australia. She has lived there her whole life. Under the name J. L. Perry, her previous four novels have all been #1 bestsellers in ebook: BASTARD, HOOKER, JAX, and THE BOSS. Foreign rights in BASTARD have been sold to Hungary and France where BASTARD was recently a Top 20 amazon ebook bestseller. Jodi travels annually to the UK and US to promote her books at romance events and to meet her readers. Her other titles include Luckiest Bastard, My Destiny, My Forever, Damaged and Against All Odds. NINETEEN LETTERS is her tenth novel, and debut under the name of Jodi Perry. It will be published on the 29th August, 2017 through Hachette Australia, she has also recently secured a UK publishing deal for Nineteen Letters with the Sphere imprint of Little, Brown Book Group, and has sold translation rights to Germany.