Murder in the Med by Peter Mayle @BloodhoundBook #BlogBlitz #Review 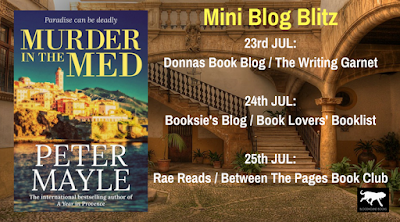 Thank you for stopping by I'm delighted to be sharing my review for Murder in the Med by Peter Mayle. First of all let's take a look at the description for the book... 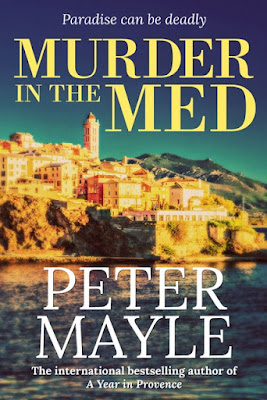 When a billionaire finds himself on the wrong side of a Russian tycoon, he’s fortunate to have friends, Sam and Elena, on hand to help him out. Now it’s up to Sam, who’s saved his friends neck before, to negotiate with an underworld hit men and Mafioso, in order to prevent his friend from winding up dead.

As usual, Sam and Elena still find time to enjoy the good life, but as Sam’s sleuthing draws him closer to the truth, he realizes his friend might not be the only one in trouble…

Rich with clever twists and sparkling scenery, Murder in the Med is the ultimate summer holiday read.

It's safe to say that I was well and truly transported to the Mediterranean with this book. With beautiful descriptions guaranteed to make you feel as if you are right there. I have to admit to feeling pretty hungry at times with all the lovely food being described! Although I will say that there is a lot happening in this story that could make you wish you were well away from the trouble that this group of characters find themselves mixed up with. I really enjoyed seeing how they all came together to try and help, coming up with ideas to foil one very determined Russian and his plans!

There was a steady pace throughout and the length of the story is just right to read in one afternoon or even relaxing with in an evening. Murder in the Med isn't exactly a fast paced thriller but has more of a cozy laidback style which made for a lovely change. Murder in the Med has a fabulous setting that is perfect for a more relaxed reading experience!


With thanks to Sarah at Bloodhound Books for my copy. 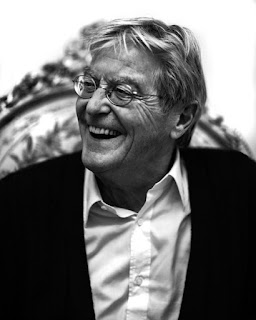 Peter Mayle was educated at Brighton College, England, and Harrison College, Barbados, where he developed a lifelong fondness for the sun. He left school at sixteen and returned to England, where he failed to distinguish himself as a waiter or a laundry van driver before joining Shell as a trainee. When he was 21, he moved to New York to work for David Ogilvy's advertising agency, and subsequently spent the next fifteen years in the advertising business, before leaving honest employment to become a writer.

His first book, "WHERE DID I COME FROM?" (explaining the facts of life to children) was published in 1973 and is still in print today, more than three million copies later.

He moved to Provence in 1987 with the intention of writing a novel, but the distractions of his new life interfered and the result was A YEAR IN PROVENCE. Published in 1989, the book stayed on both the London Sunday Times and The New York Times bestseller lists for three years. The book has now sold more than seven million copies in 32 languages. The sequel, TOUJOURS PROVENCE, followed in 1991.

His subsequent books -- EXPENSIVE HABITS, HOTEL PASTIS, A DOG'S LIFE, ANYTHING CONSIDERED, CHASING CEZANNE, ENCORE PROVENCE have appeared on bestseller lists in Britain, America, Germany, France and Japan. A GOOD YEAR was made into a film starring Russell Crowe and directed by Ridley Scott.  His latest work, MY TWENTY-FIVE YEARS IN PROVENCE, REFLECTIONS ON THEN AND NOW, has just been published.