I'm thrilled to be taking part in the blog tour for The London Murder Mysteries by Alice Castle. I have previously reviewed Death in Dulwich and The Girl in the Gallery and I'm delighted to be re-sharing my reviews today. 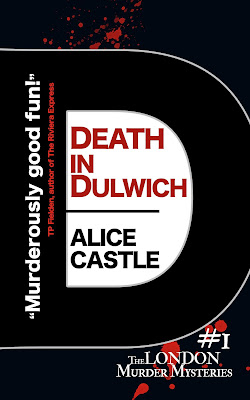 Thirty-something single mum Beth Haldane is forced to become Dulwich’s answer to Miss Marple when she stumbles over a murder victim on her first day at work.


To clear her name, Beth is plunged into a cozy mystery that’s a contemporary twist on Golden Age crime classics. But can she pull it off? She already has a bouncy young son, haughty cat, a fringe with a mind of its own and lots of bills to pay, as she struggles to keep up with the yummy mummies of SE21.

Join Beth in #1 of the London Murder Mystery series, as she discovers the nastiest secrets can lurk in the nicest places.

The whole story was really enjoyable and this has a lot to do with Beth's character I thought she was brilliant. Especially how she decides to do her own bit of sleuthing to find out who the killer is. Beth is strong and resilient especially as she has her son to raise on her own. So when she starts her new job at Wyatt's everything finally starts slotting into place until she finds herself in a very dangerous situation. I thought her determination to discover the truth was brilliant even when at times I felt like yelling at my Kindle for her to stop digging for answers and to leave everything to the police.

Gory bits are kept to a minimum so if you prefer the more grisly descriptions then you may be slightly disappointed. I guess it is more of a cozy crime/mystery which I have to say that I enjoy just as much as the really gruesome crime stories. The way Beth turned detective was such an interesting part of the story and she really does try to help even when she probably should stop. With a couple of characters acting suspiciously there were secrets uncovered and everyone was a suspect which always makes things more interesting.

I found myself pulled into the story and the elite area of Dulwich, it's so easy to imagine the school gate scenario of one up man ship and snobbery that no doubt goes on especially in the more exclusive areas. Even though from the outside everything looks rosy and perfect this book shows you that this isn't always the case.

It didn't take me long to finish this book mainly because the mystery kept me intrigued along with trying to discover what the motive could be for the murder. I really enjoyed sitting back and relaxing with this book and trying to put the clues together just like Beth did. It seems that this book is the first in a series and I'm looking forward to seeing what is in store next. 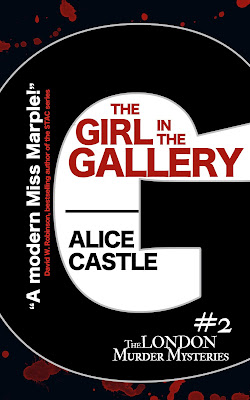 It’s a perfect summer’s morning in the plush south London suburb, and thirty-something Beth Haldane has sneaked off to visit one of her favourite places, the world-famous Picture Gallery.
She’s enjoying a few moments’ respite from juggling her job at prestigious private school Wyatt’s and her role as single mum to little boy Ben, when she stumbles across a shocking new exhibit on display. Before she knows it, she’s in the thick of a fresh, and deeply chilling, investigation.
Who is The Girl in the Gallery? Join Beth in adventure #2 of the London Murder Mystery series as she tries to discover the truth about a secret eating away at the very heart of Dulwich.

In this story what starts off as a pretty normal day plunges Beth into another mystery. Although I really think she was hoping for a quieter life after the events of the first book. If you enjoy cosy crimes I really think that this book would be a hit for you I love how Beth gets involved even if she would probably prefer to sit back and relax once in a while. She is very determined and I think this makes for a great amateur detective! Alice Castle has written an engaging character who you will root for all the way.

The mystery is intriguing with a few twists to throw the reader off track which made the book all the more enjoyable. I couldn't wait to discover the truth and to find out what exactly was going to happen next. It was great to see Harry and Beth team up again trying to put the pieces together to solve the crime. The story moves at a good pace with bits of new information coming to light at just the right time. Keeping me engaged with both the characters and story I think that it did have a different feel to the first book but this didn't make it better or worse.

There are plenty of red herrings and secrets in The Girl in the Gallery it really is a great mystery waiting to be solved!

Before turning to crime, Alice Castle was a UK newspaper journalist for The Daily Express, The Times and The Daily Telegraph. Her first book, Hot Chocolate, set in Brussels and London, was a European hit and sold out in two weeks.

Death in Dulwich was published in September 2017 and has been a number one best-seller in the UK, US, Canada, France, Spain and Germany. A sequel, The Girl in the Gallery was published in December 2017 to critical acclaim. Calamity in Camberwell, the third book in the London Murder Mystery series, will be published this summer, with Homicide in Herne Hill due to follow in early 2019.  Alice is currently working on the fifth London Murder Mystery adventure. Once again, it will feature Beth Haldane and DI Harry York.

*Terms and Conditions –UK entries welcome.  Please enter using the Rafflecopter box below.  The winner will be selected at random via Rafflecopter from all valid entries and will be notified by Twitter and/or email. If no response is received within 7 days then I reserve the right to select an alternative winner. Open to all entrants aged 18 or over.  Any personal data given as part of the competition entry is used for this purpose only and will not be shared with third parties, with the exception of the winners’ information. This will passed to the giveaway organiser and used only for fulfilment of the prize, after which time I will delete the data.  I am not responsible for despatch or delivery of the prize. 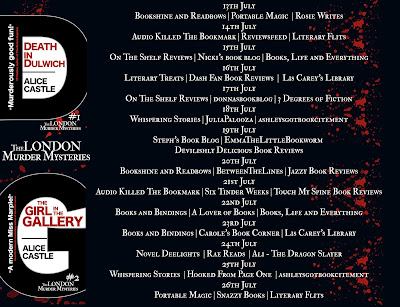