I reviewed The French Adventure by Lucy Coleman back in February this year and I'm delighted to be re-posting my review today as part of the blog tour. First of all let's take a look at the description for the book... 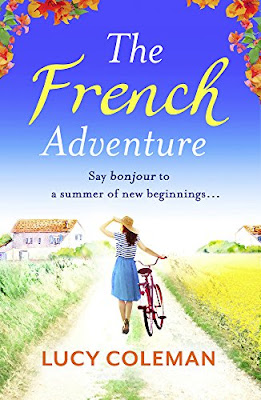 Packed full of French flavour and idyllic settings this is a romantic, heart-warming and unputdownable new novel about life and love, perfect for anyone who loves Milly Johnson, Lucy Diamond and Debbie Johnson.
Suddenly unemployed and single, Anna escapes to her parents' beautiful house in France for a much-needed recharge – and to work out what she wants to do next with her life now her carefully mapped out plan has gone out the window.
Anna gives herself 6 months to recuperate, all the while helping renovate her parents' adjoining gites into picturesque B&Bs. But working alongside the ruggedly handsome Sam on the renovation project, she didn't expect for life to take an unexpected, if not unwelcome, twist...

The L Word
Two weeks today will be the first anniversary of our first real date. Being wined and dined in a chic little French restaurant was a gigantic step forward; it signalled the beginning of a new era in my relationship with Karl. Even though at least half of the meal was spent talking about work, his intentions were clear – we were no longer simply colleagues and romance was in the air.
Since then, Karl must have told me that he loves me more than a thousand times. You might think I’m exaggerating, but I can assure you that’s not the case. He usually manages to slip it into the conversation at least three times a day. The first time he said the L word to me, it slid off his tongue so easily I could almost have missed it. It wasn’t a staring into each other’s eyes moment of discovery, just a casual ‘love you, babe’.
As the months rolled by, I pushed aside my growing fear that it was only a word to him. Because it means so much more to me, I freeze whenever he tacks it onto a sentence.
And, yes, I’m very aware that my air of disapproval does make me sound ungrateful and undeserving. But it’s all about self-preservation, you see. I’ll never utter that word again until I’m one hundred per cent certain that the man I’m saying it to believes I’m their soul mate too – the perfect fit.
The last time I uttered the L word, was six years ago. It was to a guy I’d known since childhood and the man I genuinely believed I would marry when the time was right. He was handsome in a rugged way, fired up with ambition and exciting to be around. Sadly, everyone we knew thought we were the perfect couple too, except the guy in question, as it turned out…

Anna has a pretty turbulent time at the start of this book and I could definitely understand her need to escape. Especially to such a wonderful location in France, Anna ends up staying with her parents and helping them with their renovations. This story moves at a lovely pace making sure you get to know the characters and also the lovely friendship she makes with Sam. Can there be anything more though?

There is a little bit of a mystery running through that just adds a little extra something to the storyline as Anna decides to do a little digging after making a discovery during the repair work. I loved that as the story progresses more depth is revealed to Sam's character and I really enjoyed getting to know him better.

The French Adventure was just what I was looking for to brighten up my day the lovely descriptions  set the scene and made me wish I could go and visit.

The French Adventure has a gorgeous location along with a lovely simmering romance.

Lucy Coleman always knew that one day she would write, but first life took her on a wonderful journey of self-discovery for which she is very grateful.
Family life and two very diverse careers later she now spends most days glued to a keyboard, which she refers to as her personal quality time.
‘It’s only when you know who you are that you truly understand what makes you happy – and writing about love, life and relationships makes me leap out of bed every morning!’
If she isn’t online she’s either playing with the kids, whose imaginations seem to know no bounds, or painting something. As a serial house mover together with her lovely husband, there is always a new challenge to keep her occupied!
Lucy also writes under the name Linn B. Halton.


A signed paperback copy of The Secrets of Villa Rosso and an iHeart pack.
(UK only) 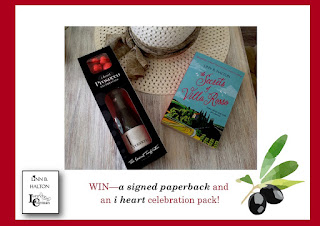