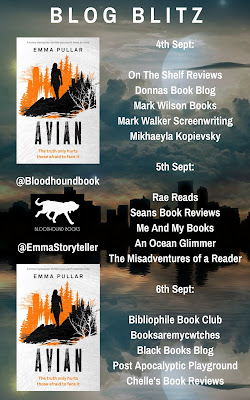 I'm thrilled to be sharing my review for Avian by Emma Pullar as part of the blog blitz today. First of all though let's take a look at the description for the book... 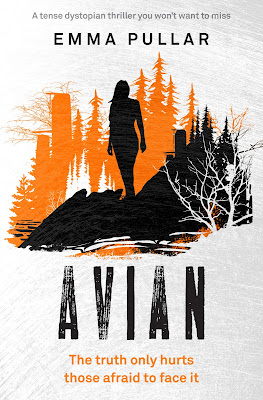 CENTRAL IS LOSING ITS GRIP ON THE CITIZENS OF GALE CITY.

Megan Skyla, who refused to play by Central’s rules and become a surrogate for her masters, has thrown the city into chaos. Corrupting those around her, she and her friends are forced into hiding – hunted by Central, the evil rulers of Gale City. Skyla’s desperate attempts to keep everyone alive ends when they’re kidnapped by feuding gangs.

Skyla cuts a deal and then betrays both gangs. Now there is nowhere left to run. It’s the desert or die. Her best friend, Crow, thinks she still wants to find a way to cure the Morbian masters of their obesity and finish what she started.

But Skyla has other plans. She’s sure there are settlements in the desert, there must be something out there … and there is. Something terrible.

Skyla is about to find out there’s more than one way to bring about change but one truth remains … Central must be destroyed in order to ensure her survival. There is no other way.

After reading Skeletal I was eager to pick up book two in the series and see what Skyla would be getting up to next. It's safe to say that there is danger, action and plenty of trouble all waiting for Skyla to get caught up in!

Emma Pullar has created an interesting and cleverly crafted dystopian world that easily pulled me in. Making me eager to see what would happen to the characters in this story along with seeing if Skylar will succeed in her plans for Central. The writing is descriptive and easily sets the scene for the reader. There are plenty of tense moments and some scenes where you may want to avoid lunch. I have learned my lesson that's for sure! :)

Skylar is experiencing plenty of emotions in this story but I guess the overriding one would be anger which is definitely fuelling her plans for revenge! There is a very dark and tense undercurrent at the heart of this book and I couldn't wait to see how it would all play out. One of the main things I enjoy about this series is that Skylar is a complicated character she is likeable but she is also flawed and that makes her personality so interesting.

Emma Pullar is a writer of dark fiction and Children’s books. Her picture book, Curly from Shirley, was a national bestseller and named best opening lines by NZ Post. Emma has also written several winning short horror/Sci-fi stories which have been published in four different anthologies. Emma’s latest picture book, Kitty Stuck, has been hugely popular and her novel, Skeletal, and the sequel, Avian, have been described as disturbing and not for the faint-hearted. She also writes articles for an online advice site called Bang2write and dabbles in screenwriting.