Thank you for stopping by I'm delighted to be taking part in the blog tour for It Happened on Dufferin Terrace by Melanie Robertson-King and sharing an extract with you all today. Also don't forget to check out the giveaway to win an e-copy of the book. First of all though let's take a look at the description for the book... 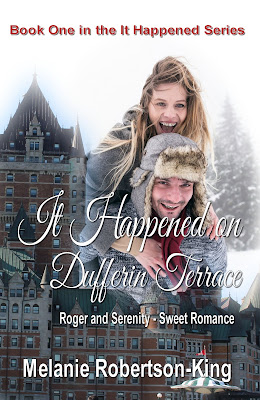 Toronto business consultant, Serenity Layne, knew the only person she could depend on was herself. Married to her career, she has no time for other pursuits and life’s intangibles.

Widowed for three years, Roger Scott, a data security specialist in Quebec City, is a single parent to his ten-year-old son, Adam.

On a day out on the Plains of Abraham with their black Labrador retriever, Roger’s cell phone rings incessantly. Adam has played matchmaker and put his father’s profile on a number of online dating sites.

The week before Christmas, Serenity is heading up a series of meetings after a six-month study of the Canadian retail chain, jonathans. After an unpleasant encounter with one of the store managers, she escapes from the boardroom of the Château Frontenac Hotel, only to be bowled over by Roger and Adam’s dog.

Guilty over the accident, Roger invites Serenity out for a drink by way of apology. Over the course of the week, and spending time together, feelings long dormant for Roger are re-awakened. At the same time, emotions foreign to Serenity fill her with contentment and happiness.

Will the couple get their happily ever after? 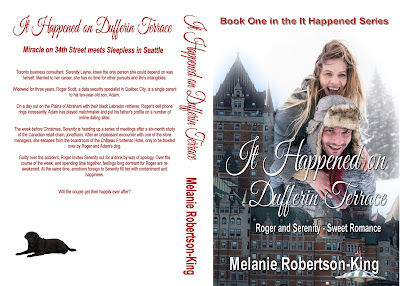 The following morning, six months of gruelling work came to fruition. In the Place d’Armes conference room, Serenity turned on her MacBook Air with the PowerPoint presentation and ensured the projector functioned. In addition to the electronic copy, the hard copies she made in Montreal for the jonathans participants were placed them in front of each chair.
This was the first time her superior sat in on one of her meetings, making her more nervous than normal. Did he not trust her judgement?
Scheduled to start at ten a.m., a number of attendees were still missing. The time function on her Fitbit indicated three minutes to go. The managers had to arrive soon or her boss's trust in her abilities would be shattered. A brief assessment of her leather-bound notebook confirmed the time and date.
Gradually, men in three-piece suits, shirts and ties straggled in. They nodded at her as they took their seats. During her visits to the outlets across Canada, she came together with them. All were friendly and cooperative. Some stores performed well, while others struggled.
The head of jonathans made his entrance. Well over six feet in stature, with a stocky frame, his imposing size commanded respect and attention.
“Good morning,” she said.
The man acknowledged her with a nod of his head and moved to the head of the table.
Now, she and the other attendees waited for her missing employer and one last jonathans employee.
“We’ll give them another five minutes then we’ll start. In the meantime, feel free to look at the documents in front of you.” She lingered by the chair used by the director of the Vancouver location and smiled.
The door burst open, eliminating the opportunity to speak with the gentleman. In the gap stood the man from the Yorkville Avenue outlet, as unkempt as the first time she met him. When he looked up, his eyes bulged, and his jaw dropped. “You’re the hard-nosed, jumped up high and mighty who made trouble. You’re the reason we’re having this powwow,” he snapped.
The hairs on the back of her neck bristled. Coat plucked from the rack, she darted out the door putting on the garment on the fly. The man busted her straight away. No way could she head this meeting now. Where was Martin Thacker? He would have stood by her.
She left the hotel, turned right, and scurried through the arched vehicular entryway on Rue Saint Louis. From there, she stumbled to the boardwalk running adjacent to the spectacular architecture and overlooked the St. Lawrence River and the town underneath.
Snow, packed down from shovelling and plowing, made the boards slippery. High-heeled shoes were inappropriate for the conditions, but escaping that room was paramount.
Why did she allow that man to antagonize her? Any other time, any other meeting and she would have let comments like his roll off her. This action was out of character.
Struggling to maintain her balance, she picked her way to the hand rail. At least she had gloves in her pockets. After extracting the knitted mittens, she pulled them on her hands and tried to regain her composure so she could go back to the meeting. She would have to create an excuse for her sudden departure.
Arms resting on the bannister, she took in long, slow breaths. Each time she exhaled a puff of steam formed in front of her.
About to go back into the warmth of the hotel’s conference room, she let go and turned. A massive black dog charged at her with a man and a boy in pursuit. The ear flaps of the man’s trapper hat resembled wings. Stretched out horizontally, how he managed not to take flight astounded her.
“Tori, bad girl. Halt.” The man shouted commands to the canine, but the animal was oblivious to them.
Before she had an opportunity to react, the black Lab launched itself in the air and hit her square in the chest knocking her to the ground. The impact sent her eyeglasses flying and they crashed on the granite ledge beneath the handrail. The child dove for them but couldn’t get a proper grip. His fingertips brushed the frames and her eyewear skittered away from him on the icy rock and vanished. 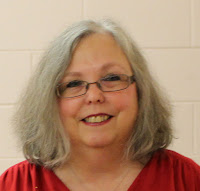 Melanie Robertson-King has always been a fan of the written word. Growing up as an only child, her face was almost always buried in a book from the time she could read. Her father was one of the thousands of Home Children sent to Canada through the auspices of The Orphan Homes of Scotland, and she has been fortunate to be able to visit her father’s homeland many times and even met the Princess Royal (Princess Anne) at the orphanage where he was raised.
Facebook: Melanie Robertson-King- Author
Twitter: @RobertsoKing
Goodreads Author Page: Melanie Robertson-King
Blog: Celtic Connexions
Website: melanierobertson-king.com

An e-copy of the book

a Rafflecopter giveaway
at September 04, 2018