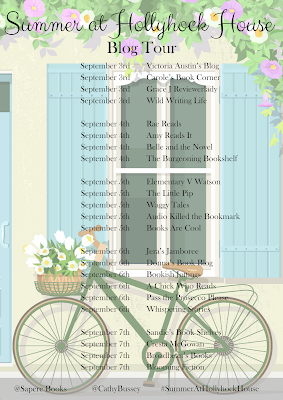 I'm delighted to be one of the stops on the blog tour for Summer at Hollyhock House by Cathy Bussey and sharing my review today. First of all let's take a look at the description for the book... 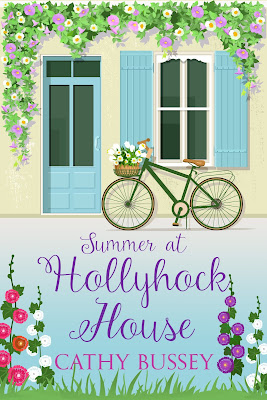 Faith Coombes should have been over the moon when her long-term boyfriend proposed to her. But instead, she broke up with him. Rob was safe, reliable, nice and … boring. Nothing like the only person who had ever broken her heart…

Unable to afford the rent on another flat and desperate for a new start, Faith takes the plunge and moves back to the village she grew up in, returning to the house that holds so many memories for her.

Hollyhock House, the family home of her best-friend Minel, also belongs to the boy who meant so much to her all those years ago…

As Faith falls back in love with the sprawling surroundings at Hollyhock she also finds herself falling all over again for the only person who has truly hurt her.

Can Faith come to terms with her past? Did she make the wrong decision in breaking up with Rob?

Or does her heart really lie at Hollyhock House?

So if you are looking for a book to whisk you away now summer is nearly over I would recommend picking up a copy of Summer at Hollyhock House. There is a wonderful sense of nostalgia in this story and I really got a sense of the emotions that the younger Faith felt along with everything that happens in the present too. Faith has been living a normal life if a little on the safe side but after coming to the realisation that she isn't happy she ends up back at her best friends house where the past definitely resurfaces.

The pacing is pretty good, once I had read a few chapters I easily got a feel for the characters and began to enjoy it even more. I could relate to the characters even their flaws which only made them more realistic in my view. There were some emotional parts that were handled well and added an extra depth to the plot. It really is a story about love and friendship along with emotions that just won't stay buried in the past. I have to mention the connection between Faith and Rik, it was written really well and completely wrapped me up in their story. I couldn't stop reading until I knew how it would all end for this group of friends.

With thanks to Caoimhe at Sapere Books for my copy. 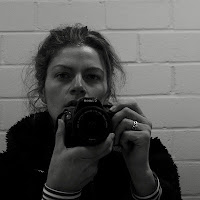 Cathy Bussey is an author, journalist and hopeless romantic who wrote her first book at the tender age of six. Entitled Tarka the Otter, it was a shameless rip-off of the Henry Williamson classic of the same name, and the manuscript was lost after she sent it to her pen-pal and never heard a jot from her since.

Fortunately reception to her writing became more favourable and she spent ten years working for a range of newspapers and magazines covering everything from general elections and celebrity scandals to cats stuck up trees and village fetes. She has been freelance since 2011 and written for The Telegraph, Red Online, Total Women’s Cycling and other lifestyle and cycling publications and websites.

She is the author of three non-fiction books and her debut and thankfully non-plagiarised novel Summer at Hollyhock House will be published by Sapere Books this year.

Cathy Bussey lives on the leafy London/Surrey border with her husband, two children and a dog with only two facial expressions, hungry and guilty. Her hobbies include mountain biking, photography, wandering around outside getting lost, fantasising about getting her garden under control, reading, looking at pretty things on Instagram and drinking tea.