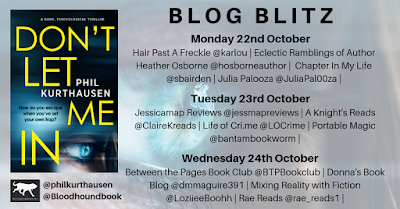 Thank you for stopping by I'm thrilled to be one of the stops on the blog blitz for Don't Let Me In by Phil Kurthausen and sharing my review today! First of all though let's take a look at the description for the book... 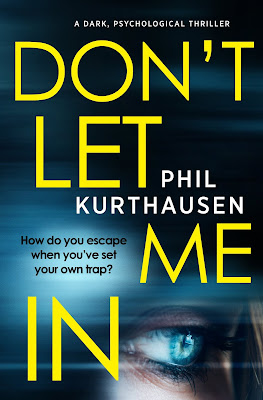 How do you escape when you’ve set your own trap?

From behind the locked door of her home, Sarah broadcasts her popular podcast. When she starts to  seek the truth about the murder of a teenage girl 12 years earlier, she soon finds herself the centre of unwanted attention.

While trying to manage her agoraphobia, as well as the online trolls and her family life, Sarah begins to uncover some uncomfortable facts relating to the cold case.

As she edges closer to accusing someone of the murder, the online threats soon become physical and as the outside world draws closer and closer to her front door threatening her home, her family and her life, Sarah must decide between fight or flight…

I didn't quite know what to expect when I picked up this book but what I did find was a tense undercurrent running throughout. With the mystery just bubbling away under the surface as Sarah goes about making her podcasts and collecting enemies along the way. Then add in the agoraphobia to the mix and you have quite an intriguing story. With this added claustrophobic element it easily increases the tension. I enjoyed the podcast segments as it all felt quite real and managed to grab my attention and pull me in as I was eager to learn the details behind the murder of Lauren.

Sarah is an interesting character I can't say that I liked her a 100 percent of the time but the fact she has flaws made her seem a little more realistic. Hints are made to Sarah's past and I couldn't wait to find out more along with twists and turns keeping me on my toes. The pacing of the story is pretty steady along with a few parts that had me racing through the pages, especially towards that ending!

A story full of secrets just waiting to burst out and I couldn't wait to discover the truth!

With thanks to Emma at Bloodhound Books for my copy.

Phil Kurthausen is the best selling author of the Erasmus Jones series of novels and the terrifying new psychological thriller, Don’t let me in.

He has travelled the world working as a flower salesman, a lawyer and, though scared of heights, helped to paint Sydney Harbour Bridge. Ken Dodd once put him in a headlock for being annoying. He currently lives with his wife in Barcelona
​
He has published award nominated short stories and his novel ‘The Silent Pool’ won the Thriller Round in the Harper Collins People’s Novelist Competition broadcast on ITV in November 2011 and he later appeared in the final. The Silent Pool was shortlisted for the Dundee International Literary Prize in 2012 and the second novel in the Erasmus Jones series, Sudden Death was a commercial and critical success. He has broadcast short works on BBC Radio 4 extra and written TV and Film screenplays.