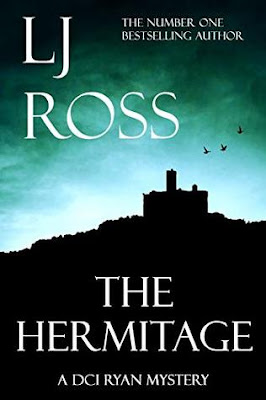 He thought he was invincible, but he was wrong…
When an old man is found dead inside the ancient hermitage at Warkworth Castle, Northumbria CID are called in to investigate. With no apparent motive, it’s their job to unravel why he was murdered – and this time they’re forced to do it without their star detective…
DCI Ryan is thousands of miles away. He’s tracked a killer across Europe and has sworn not to return until he has his man in custody. Nathan Armstrong is a dangerous psychopath but there’s just one problem – he’s also an international celebrity; a world-famous thriller writer with money and connections.
Ryan is a stranger in a foreign land, but he knows one thing – he’ll never give up.
Murder and mystery are peppered with romance and humour in this fast-paced crime whodunnit set amidst the spectacular landscapes of Northumberland and Tuscany.

I may have come quite late to the DCI Ryan series as I started with book 6 but now that we are on book 9 all I can say is that this series just keeps getting better and better! I do have to mention first of all that I think it has helped reading the last few books. Mainly so that you can get a better feel for the characters back stories and for events that have taken place previously.

LJ Ross has not only created some fantastic characters but the setting for this book really came to life too. I felt as if I was right there experiencing everything with the characters. Using descriptive writing that instantly transported me to the scene. Right from the start I enjoyed the contrast of the two investigations as the story is set both in Newcastle and Italy. You get to see Anna and Ryan working together along with the added bonus of seeing a little bit more of MacKenzie and Phillips, they really do make such a wonderful team.

The plot itself was intriguing and had me hooked wondering what would happen next with plenty of twists, turns and surprises that kept me on my toes. I pretty much flew through the pages of this book especially as the tension increased I just couldn't wait to see how it would all end! Even though there are darker moments there is humour sprinkled throughout that definitely lightens the mood. I think this created a brilliant balance that made both the story and the characters so engaging. I have to say that one of the things that makes this series extra special is the characters, everything just seems to click and they really are like one big family. I was left with such a smile on my face and I cannot wait to see what the next case will be!

Brilliant from start to finish!

With thanks to LJ Ross for my copy.